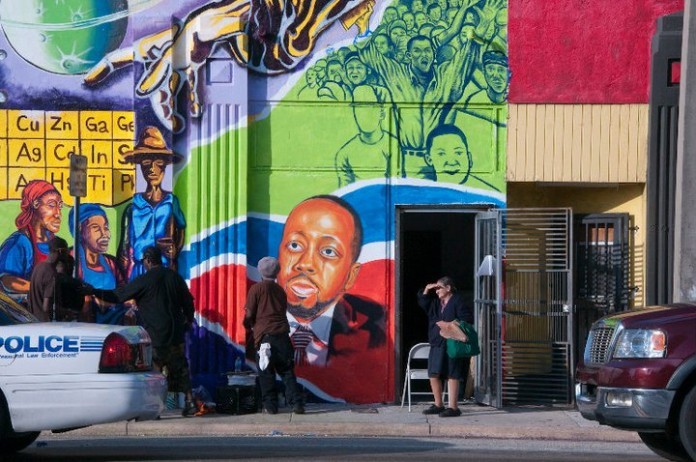 Little Haiti, long an historic and cultural refuge for the Diaspora in South Florida, has also been a creative space for Haitian-American artists, from garnering inspiration to displaying their work, whether painted on buildings or exhibited inside galleries throughout the neighborhood. But some advocates see this changing rapidly, as more property developers are eying the area as prices rise in nearby art centers like Wynwood and the Design District.

“Little Haiti has gotten very expensive because of rich developers and investors who come and buy properties and raise rents. Next thing you know these young artists are priced out,” says Haitian Women of Miami (FAMN) founder, Marleine Bastien.

FAMN is currently looking at several strategies to establish such protections, from forming an official cultural district to starting a Community Reinvestment Act (CRA) fund. The ultimate goal – to ensure Haitian-American art still has a home in the neighborhood, as international artists, galleries, and the high-end retail and residential developers that often come with such attractions move in.

“We should find a way to get the area developed, creating a space for the locals who’ve been there for years,” says Bastien.

Of major concern for local artists is securing affordable retail spaces, which can put them at the mercy of the renting market, says Joann Milford, Executive Director of Northeast Second Avenue Partnership – a community revalidation co-operative that also produced cultural showcases.

“Little Haiti is still a place that’s a lot more affordable for outside artists. But for our Haitian artists, it’s a different story,” says Milford. “Our artists don’t go into studio spaces, where they can share expenses with others. They’re usually in the own retail locations, which attracts monthly expense.”

And so far, the galleries that have recently moved into the neighborhood, such as Gallery Diet and Emerson Dorsch, are maintaining their current rosters, and not yet incorporating work that would more reflect the community’s culture.

“I’m not sure if if moving to another neighborhood would change what they show,” says Karla Ferguson, Executive Director of the Yeelen Art Gallery in Little Haiti, which specialized in contemporary works from the African and Caribbean Diaspora. “I came to Little Haiti because of the people. For others it may be just for affordability. But I hope that means that they don’t insulate themselves. We hope they’d be curious to explore different ideas of art.”

Some developers, however, seem to be moving away from the Little Haiti moniker, listing their Little Haiti properties with older names such as Lemon City, when the area was dominated by Bahamians immigrants often selling lemons on the roadside.

But “no one come to Little Haiti to buy lemons,” says Miami Herald photojournalist and art photographer Carl Juste, who also maintains a studio in Little Haiti in partnership with the Haitian Cultural Arts Alliance. Despite the changing economic landscape, Juste still hopes newcomers will come to appreciate and collaborate with the area’s rich cultural legacy.”

“We’ve always had great artists here,” says Juste. “Haitians by nature have a strong connection with art. Here we always had a presence of really smart and culturally sophisticated people. It just that for some crazy reason the city didn’t celebrate that. Now with people like [Edouard] Duval-Carrié and [Edwidge] Dandicat attracting the spotlight, the county has been put on notice.”

The surge of development interest, say Juste, is just part of the Little Haiti’s transformation, from the original sanctuary where his father, legendary community advocate Viter Juste, helped many establish a new life in America.

“Within five or six years you probably won’t recognize the place, unless you go to the iconic spots like Caribbean Marketplace or Norte Dame [Church],” says Juste. “But I hope it’s for the better. I hope people that come see that their success came on the backs of others, because it’s their home. We’ll see, but I’m betting.”