Ft. Lauderdale Strikers season comes to a close after loss 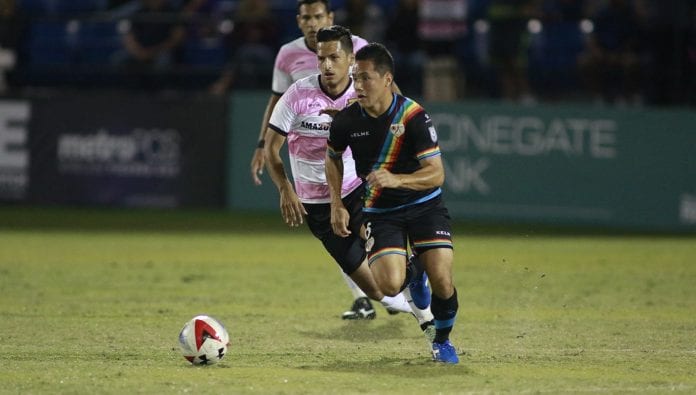 Ft. Lauderdale Strikers season comes to a close after loss

The Fort Lauderdale Strikers late-season push for the postseason comes to an end after a 2-0 defeat to Rayo Oklahoma City in the season home finale at the Central Broward Stadium.

The result eliminates the Strikers as well as Florida rivals Tampa Bay and Miami from postseason consideration. Rayo OKC now sits in pole position to claim the final NASL postseason spot with one match remaining.

The Strikers’ chances for a fifth NASL playoff appearance didn’t end without a fight, but the Red and Gold side was unable to overcome Oklahoma City’s second half goals from Sebastien Ibeagha in the 49th minute and substitute and former Strikers standout Pecka in the fourth minute of stoppage time.

There were plenty of chances in both halves for the Strikers, but the finishing touch eluded the team despite playing with a much needed sense of urgency.

Dalton has the first good attempt on goal just eight minutes into the game, but his shot sailed high. Junior Sandoval made a good run into the penalty area to meet a low pass from the right side, but guided the ball just wide of the far post in the 25th minute.

In the 43rd minute, the Strikers had a run and combination between Amauri, Junior Sandoval and Geison Moura on the left flank that was finished by Geison with a shot from around the edge of the box missing the target.

Fort Lauderdale goalkeeper Bruno made two quality saves in the 20th and 22nd minutes, with the second one making himself big as he came out to close the angle on a counterattack opportunity by Devon Sandoval, who shot the ball wide left.

Shortly after the break, the Strikers needed to force the issue and made relatively early substitutions by inserting three attacking players — Jose Angulo (50’), Ramon Nunez (60’) and Maicon Santos (75’).

The effort was there as the Strikers piled on the pressure, but the finishing touch lacked some precision in the second half.

Italian forward Amauri came close in the 55th minute when his re-direct of a pass on the shortside rolled on the outside of the post. Amauri also had a good header nine minutes later as it was blocked from making its way into the net by a Rayo OKC defender.

Nunez found himself in the box as well, but only managed to hit the post from close range after 67 minutes.  Geison also was set up nicely by Amauri seven minutes from time, but the Brazilian’s attempt sailed over the crossbar.

Fort Lauderdale concludes its 2016 NASL campaign in Ottawa on Saturday.