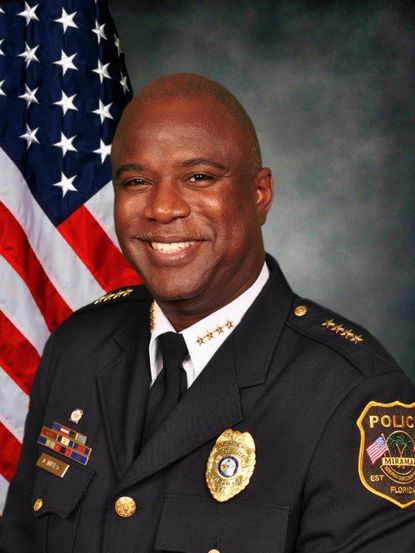 Miramar Police Chief Dexter Williams, in his capacity as the president of the Broward County Chiefs of Police Association (BCCPA) issued a position statement addressing the civil unrest resulting from the death of George Floyd.

Below is his letter to Miramar and the entire Broward community:

“On May 25th, 2020, the Minneapolis Police Department placed into its custody George Floyd and subsequent to the detainment, died in custody of the officers. Understanding that the sequence of events leading to his death has sparked nationwide protests. The City of Minneapolis is experiencing catastrophic destruction in its communities due to property damage, defiance of public safety, civil unrest and the degradation of trust for the police. The Broward County Chiefs of Police Association (BCCPA) takes these incidents extremely serious and we are standing in solidarity with the Minneapolis communities for peaceful protest.

It is our responsibility as leaders in Public Safety to safeguard the community’s trust as we render aide and uphold the laws of the great State of Florida. As we work hard to hold true to this oath, incidents such as the Minneapolis in-custody death degrades the trust of our collective communities, the dignity of the badge and the respect that has been earned by the honorable men and women that serve across this great nation. As an association, we shall not stand by idle and allow the mistreatment of our black and brown communities. The badge should not be used as a tool to protect rude and disrespectful behavior. The badge represents, HONOR, INTEGRITY and RESPECT.

As police executives, we must do what is necessary to maintain the quality of life within our communities. The video viewed by millions of people displayed a blatant disregard for life and far exceeded the force necessary to effect the arrest of George Floyd. Minneapolis Police Chief Arradondo made strides to quell any civil unrest by immediately terminating the four officers involved in this incident. Unfortunately, the community’s pain resultant from this incident was too great to bear as they stood in protest.

It is the position of the BCCPA to stand with our communities as we attempt to anchor our public safety professionals in this region to their ethics, their values and preservation of the integrity of the badge. We believe transparency of the justice process will prevail and root out injustices that exist in our society. It is a sad time for the family and friends of George Floyd, a sad moment for our profession and the nation. We ask all stakeholders, community leaders and the general public to bring forth viable solutions to prevent future atrocities of this nature. The BCCPA membership extends their heartfelt sympathies to the State of Minnesota and the Minneapolis community.”