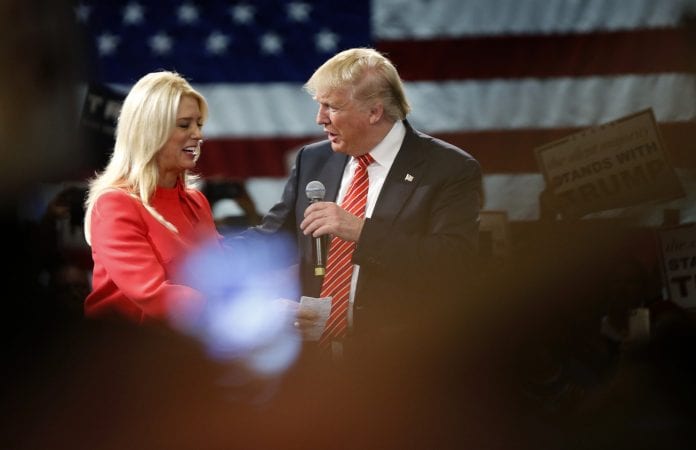 Earlier this month, Florida Democratic Party Chair Allison Tant filed an elections complaint with the Florida Elections Commission against Republican presidential nominee Donald Trump, claiming he made an illegal donation of $25,000 to Bondi. The lawsuit alleged Bondi personally solicited Trump for a donation during her 2013 campaign for attorney general and the Donald J. Trump Foundation donated $25,000 to Bondi in violation of IRScode. When Bondi attempted to return the donation, the Foundation refused to accept the check, but Trump reimbursed the Foundation $25,000, in violation of Section 106.08(5)(a), Florida Statutes.

It’s also alleged at the time Bondi requested and Trump made the donation, the attorney general’s office was reviewing complaints of fraud brought against Trump University operated by Donald Trump.

Bondi was originally elected attorney general in 2010.  Prior to her taking office in 2011 several Florida residents complained to the state about fraudulent practices of Trump University founded in 2005, offering courses in real estate, asset management, entrepreneurship, and wealth creation. Bondi said her office received three complaints since she took office, one before the $25,000 donation and two after.

There are allegations and calls by Bondi’s critics for her to resign because it’s implied she gave Trump a pass on investigating the claims against the university in exchange for the money. However, Bondi said she “would never, ever trade any campaign donation for some type of favor to anyone.”

Bondi said she solicited donations from Trump and several people during her 2013 reelection campaign.  However, when Trump made the $25,000 donation he was the subject of a $40 million lawsuit filed by New York Attorney General Eric Schneiderman.

Trump also hosted a fundraiser for Bondi at his Mar-a-Lago resort in Palm Beach in March 2014, after it is alleged she was aware of the lawsuit against the university.

During the press conference Bondi said she hoped her credibility hasn’t been damaged because of the controversy, and insisted she wouldn’t be resigning from office.

Bondi whose term as attorney general ends in November 2018, has indicated she will be out of politics when this time comes.