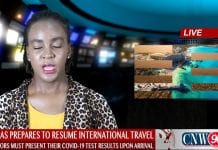 A look at some of the top stories making the news today, April 7, across your Caribbean-American community in South Florida, I’m… for CNW 90.

IRS agents have collected just over US$700,000 worth of liquidated assets in Jamaica held by prominent Jamaican account, Pamella Watson. Once a fixture among South Florida’s Jamaican community, Watson is currently serving 6 ½ years in prison for tax fraud charges. Jamaica authorities say they are working on liquidating close to US$110,000 more. Watson is required to restitute US$3.6 million as part of her plea bargain..

Local advocates are calling for Florida’s congressional representatives to support upcoming initiatives proposed by the Consumer Financial Protection Bureau. Though Florida reps argue that the state’s current rules are effective, reports from the Center for Responsible Lending says the average Florida payday loan costs remain high, at 278 percent of the original loan.

In sports, the USA Cricket Association reports a 5 percent increase in debt, totaling over $4,300,000. The figures were released ahead of the Association’s annual board meeting this Saturday at the Central Broward Regional Park in Lauderhill. USACA’s ICC membership was suspended last June, after a review cited concerns about the association’s financing.

St. Lucia government has announced that they will rename the Beausejour Cricket Ground after West Indies T20 cricket captain, Darren Sammy, for leading the team to a spectacular victory against England at the recent ICC World Cup.