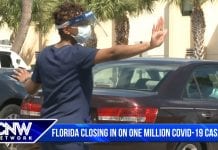 A look at some of the top stories making the news today, January 19, across your Caribbean-American community in South Florida.

Former Jamaican contestant from “The Voice” Anita Antoinette gave a stellar performance of her latest music yesterday at South Florida’s NBC 6 show, “The Mix,” hosted by Roxanne Vargas. A daughter of reggae singer Clinton Fearon, Antoinette says she is working on additional material, due for release later this year.

Jamaican U.S. college soccer star Ojai Bedward says he has his eye on joining a Major League Soccer club next season. The 21-year-old Excelsior High School alumni has a stellar performance last year, leading his school Bryant & Stratton College to the USCAA championship final.  Bedward will strut his skills for recruiters this summer at the Players’ Development League.

Jamaican pop reggae star OMI of “Cheerleader” fame unveils summery video for his latest track, “Drop in the Ocean.” The track is the third single to be taken from his debut album “Me 4 U,” following on from second top 10 hit “Hula Hoop.”

For more information on these and other stories, visit caribbeannationalweekly