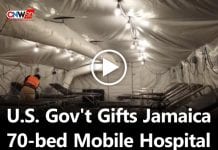 A look at some of the top stories making the news today, April 29, across your Caribbean-American community in South Florida.

Miami Dade police department will introduce one thousand body cameras for officers in the Midwest district. The Miami police department says they are implementing the program to improve police service, accountability for individual interactions, and public safety.

During a recent interview in Lauderhill with CNW90, the former Prime Minister of Trinidad & Tobago, Kamla Persad-Bissessar, called for greater dialogue in the current impasse between Jamaica and the Twin Republic over reports of Jamaicans being denied entry into the country.

Jack Radics’ Caribbean style mother’s day show has been cancelled, with no future date released. The show’s producer, Michelle Stanley, says the concert is postponed due to logistic and technical issues. Stanley however assured fans that Radics will soon return for another concert at a later date.

In sports, the FC Steelers won their match against the Lauderhill Jrs with a score of 3-0, maintaining their spot at number one in the CASA Soccer Super League tournament. Albion Plantation also won last night against Team Academy 0-2 securing Plantation at 2nd place. The next set of matches will be on May 4 at 7:45 pm.

Trelawny resident, Violet Moss Brown has received the title of Jamaica’s oldest citizen. The 116 year old is only 8 months younger than the world’s oldest person, Susannah Jones of New York.

Congratulations to this week’s winners of CNW90’s “click to win” sweepstakes. Ten lucky music fans won tickets to the recent Boyz II Men and En Vogue Concert at the Lauderhill Performing Arts Center . More tickets are up for grabs by subscribing to the CNW90 newsletter at caribbeannationalweekly.com. And remember to pick up this week’s copy of our Caribbean National Weekly at your nearest Caribbean outlet.