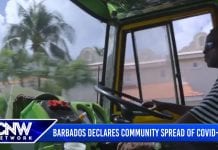 A look at some of the top stories making the news today, October 5, across your Caribbean-American community in South Florida.

Speaking at the recent City of Miramar State of the City address, Mayor Wayne Messam announced several infrastructural projects, include developments for Miramar historical East district. Messam says these plans are part of the city’s efforts to boost its business competitiveness.

Dynamic Taekwondo Duo, Trini-Americans Brandon and Melissa Joseph won gold and silver
respectively at the recent Taekwondo Grand Prix 8 tournament in Sarasota Florida. Both Brandon and Melissa, who is Trinidad’s Olympic hopeful, will next compete in the Trinidad and Tobago Taekwondo Open October 9 in Port of Spain.

What’s trending:
South and central islands in The Bahamas are in recovering mode as Hurricane Joaquin, one of the strongest storms on record, heads for Bermuda.
For more on what’s trending, follow us on Facebook and Instagram at Caribbean National Weekly, and on Twitter at National Weekly.