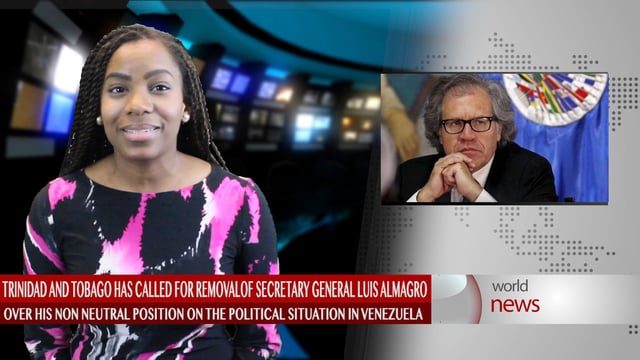 The twin island republic of Trinidad and Tobago has called for the removal of the Secretary-General of the Organisation of American States, OAS – Luis Almagro over his non-neutral position on the political situation in Venezuela. In a strongly worded statement on Thursday, Prime Minister Dr. Keith Rowley warned the 15-member Caribbean Community, CARICOM, a grouping of the possibility of destroying “itself as an honest broker with respect to any involvement in assistance to Venezuela and its internal problems.

The leader of the main opposition Barbados Labor Party, BLP, Mia Mottley, has described the national budget as“a de facto devaluation” of the Barbados dollar. She was responding to proposals presented byFinance Minister Chris Sinckler earlier this week.She said the only solution to the current economic situation is for Prime Minister Fruendal Stuart to dissolve parliament and call fresh elections.

And in Sports The West Indies Cricket Board, has formally announced the much-anticipated name change to Cricket West Indies, saying the rebranding accurately represented the function of the governing body.President Dave Cameron announced the move two years ago and last January said the process had been completed.In addition to the name change, the board also launched their rebranded website as well as announcing that all representative teams will be referred to as the WINDIES.

Here’s What’s Trending. President Donald Trump is scheduled to announce plans to withdraw from Paris Climate accord- a move that could dampen efforts worldwide to curb global warming.

For Tomorrow’s weather forecast
It will be mostly cloudy with showers likely in Broward and Palm Beach Counties and mostly cloudy with scattered showers in Miami-Dade, with a high of 86 and low of 75 degrees. Today’s news was brought to you by the Florida Department of Health in Broward County, who encourages you toProtect Your Baby, Vaccinate On Time, Every Time. They remind you that ImmunizationsareSAFE, PROVEN PROTECTION. For more on these and other stories visit us at caribbeannationalweekly.com Make sure to pick your copy of Caribbean News weekly at your nearest Caribbean American outlet.