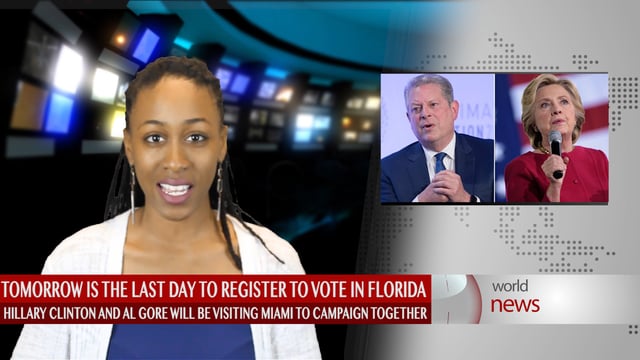 A look at some of the top stories making the news today, October 11th, across your Caribbean-American community in South Florida.

Spraying for mosquito larvae, in sections of Dania Beach, Lauderhill and Fort Lauderdale has been postponed due to weather. It is now tentatively rescheduled for tomorrow, weather permitting. The helicopter will be spraying between the hours of 12:30a.m. and 6 a.m.

Today is the last day to register to vote in Florida and to shoe the urgency, Hillary Clinton and Vice President Al Gore will be visiting Miami to campaign together for the first time to discuss the urgent threat posed by climate change and lay out the high stakes of November’s election. The event is open to the public by RSVP.

This Sunday is the 5th staging of the Annual Orlando Jerk and Caribbean Culture Jerk Festival. Jerk dishes will include lobster, chicken and fish accompanied by the sweet sounds of Reggae and rocksteady. During Jerk Week”, today through October 14, Orlando residents will receive free tickets to the Orlando Jerk Festival and Jerk Chicken Meals by listening to Star 94.5FM around midday and participating in the on-air contest.

Tonight in the third round of the 2016-2017 Scotiabank Caribbean Futbal Union Men’s Caribbean Cup, Jamaica will take on Guyana at the Leonora Stadium in Guyana at 8 p.m. and Trinidad and Tobago Soca Warriors will take on Martinique tonight at 8 p.m. at the Pierre Aliker stadium.

Now, here’s what’s trending: The U.N. humanitarian coordinator made an emergency appeal for nearly $120 million in aid to devastated Haiti yesterday as local aid officials struggled to get food, medicine and water to increasingly desperate communities. Officials said that young men in villages along the road between the hard-hit cities of Les Cayes and Jeremie were putting up blockades of rocks and branches to halt convoys of vehicles bringing hurricane relief supplies.