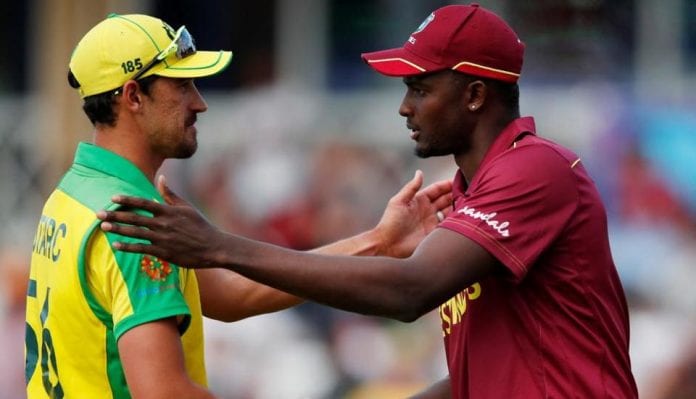 In pursuit of 289 at Trent Bridge in a contest marked by poor officiating, West Indies were well placed at one stage on 190 for four in the 35th over but then watched as five wickets tumbled for 66 runs, as the Caribbean side paid the price for injudicious strokes late in the innings and ended on 273 for nine off their 50 overs.

Hope top-scored with a patient 68 off 105 balls that included seven fours, and appeared to be steering West Indies to victory but his demise in the 35th sparked the West Indies slide, handing Australia their second straight win of the tournament.

Holder struck 51 off 57 balls with seven fours and a six and hopes of a Windies victory were kept alive once he remained at the wicket. Mitchell Starc’s return for a final spell, however, sounded the death knell, as he knocked over Carlos Brathwaite (16) and Holder in the 46th over to quickly end the Windies bid.

Left-hander Nicholas Pooran struck 40 while Chris Gayle and Shimron Hetmyer both got 21, but West Indies lost wickets at key moments which hurt their run chase.

Tail-ender Nathan Coulter-Nile had earlier struck a career-best 92 and stroke-maker Steve Smith, 73, as Australia recovered from 38 for four in the eighth over to reach 288 all out off 49 overs.

Coulter-Nile, batting at number eight, struck eight fours and four sixes in a robust 60-ball knock which dug the Aussies out of trouble while Smith faced 103 balls and counted seven fours.

Carlos Brathwaite got wickets at the back end of the innings to end with three for 67 while fellow pacers Andre Russell (2-41), Sheldon Cottrell (2-56) and Oshane Thomas (2-63) finished with two wickets each.