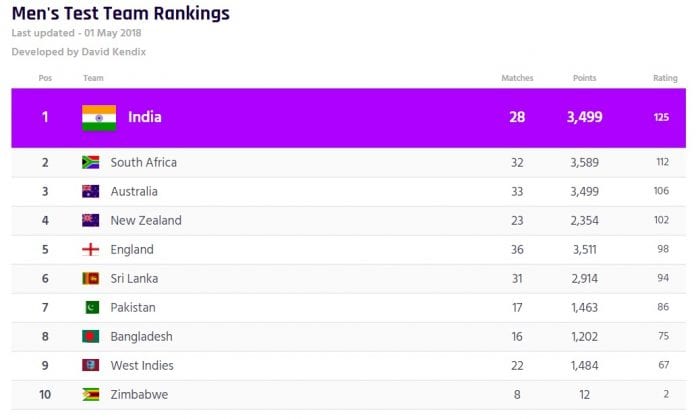 The West Indies have slumped to ninth in the latest International Cricket Council Test rankings, a historic low for the Caribbean side in the game’s longest format.

In the rankings released by the ICC on Tuesday, the Windies lost five ratings points to tumble to 67 and are now only above minnows Zimbabwe who sit on two points, having played just 14 Tests inside the last five years.

Significantly, West Indies are also now eight points behind Bangladesh who picked up four points to move to 75 and take over eighth spot in the rankings.

The bad news for the Windies come on the heels of a wretched tour of New Zealand last December when they suffered a 2-0 whitewash.

They were crushed by an innings and 67 runs in the opening Test at Wellington and soundly beaten by 240 runs in the second contest in Hamilton, with both matches finishing inside four days.

West Indies beat Zimbabwe 1-0 in a two-match series last November but enjoyed no points gains from that success.

Fallen from once lofty heights

Once World champions, the Windies have fallen from their lofty heights and struggled badly over the last two decades. Last year, they won just three of ten Tests and their victory over Pakistan in November 2016 broke a 19-month win-less streak.

They have not beaten a higher-ranked side since they swept New Zealand 2-0 in the Caribbean six years ago.

However, the Jason Holder-led unit will have the chance to improve their ranking, as they face a heavy playing schedule over the next several months.

To host Sri Lanka in June

They host Sri Lanka in a three-match series in June, Bangladesh in a two-Test tour the following month, before heading to Bangladesh and India for Test tours later in the year.

The Windies demise was the only change to the rankings but India strengthened their position at the top of the rankings, increasing their lead over second placed South Africa from four to 13 points, after gaining four points to move 125.

The Proteas lost four points to slip to 112 while Australia are now on 106 after moving up four points. New Zealand remain fourth on 102 points. England (98) lie fifth, Sri Lanka (94) are sixth while Pakistan are seventh on 87 points.