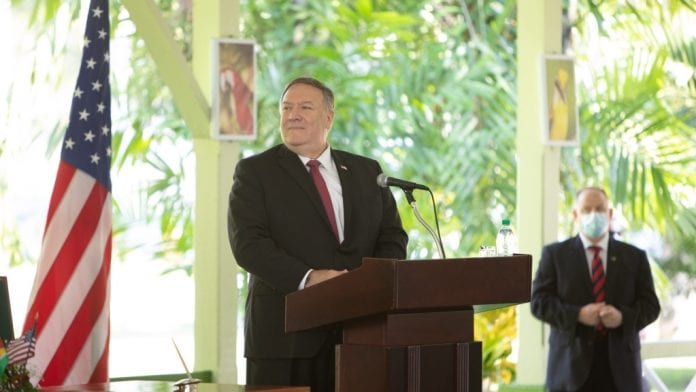 The United States Secretary of State, Michael Pompeo, is leaving Guyana on Friday for Brazil, after getting reassurance from the Guyananese government that it supports democracy in the South American country of Venezuela.

“We support and respect the need for free and fair elections in our hemisphere, Guyana’s President, Dr. Irfaan Ali told a signing ceremony with Pompeo, adding “with urgency, we believe that the democratic values and principles should be respected in Venezuela as well”.

Washington has been pushing for the removal of Venezuelan President Nicholas Maduro from office, and together with its allies, are supportive of the Opposition Leader Juan Guaido.

They have imposed sanctions on the oil-rich South American country resulting in thousands of Venezuelans fleeing for neighbouring countries including Guyana.

Pompeo told reporters that as far as Washington is concerned the “Maduro regime has decimated the people of Venezuela and Maduro himself is an indicted narcotics trafficker.

“This means he has to leave for the people of Venezuela to have the democracy that they need, the Cuban security forces must go and Maduro must leave and so the efforts to do that, to put diplomatic pressure and to support the Venezuelan people who desperately who want that same objective of the aims of the Contact Group and the EU (European Union), the Lima Group, the OAS (Organisation of American States…”

He said that the United States and other countries have “made clear that Juan Guaido is the duly elected leader of Venezuela.

“We want democracy and freedom and the rule of law just in the same way we fought for you all to achieve that for yourselves we want to fight for that to be achieved for the people of Venezuela as well,” Pompeo said.

Pompeo had been critical of the former David Granger administration following the disputed March 2 regional and general elections and Washington had threatened to impose stiffer sanctions on the government and other officials if the figures from the national vote recount had not been used to determine and declare the results of the polls.

President Ali told the ceremony that Pompeo’s visit underscores the fact that Guyana is now regarded ‘as a responsible member of the hemispheric and international community, as a nation formally rooted in democratic principles, the rule of law, respects for human rights and the pursuit of sustainable and equitable development.”

He said that his administration is grateful to the United States “for its unwavering support for democracy and constitutional order in Guyana during the recent electoral and political crisis in our country.

Secretary Pompeo’s visit serves to remind us that the US will continue to be a steadfast partner as we work with all stakeholders to consolidate our democracy, strengthen our institutions and pursue a path of unprecedented economic growth and development.”

Prior to his arrival, the State Department said Pompeo would use his trip to Brazil to “underscore the importance of US and Brazilian support for the Venezuelan people in their time of need by visiting with Venezuelan migrants fleeing the manmade disaster in Venezuela”.

Pompeo told reporters that during his deliberations with President Ali “we talked about Venezuela and the end to the illegitimate Maduro regime, the man who is denying that very democracy the Guyanese people so loved, denying the democracy for the people of Venezuela

“You have been a strong partner for us on this issue, you have supported statements through the Organisation of American States, through the Lima Group,” he said, adding that Washington is providing five million US dollars to Georgetown to help Venezuelans in Guyana “who have had to flee from Venezuela to Guyana to escape the horrors and brutality of the Maduro regime.

“I trust that the cooperation would continue and I want to express my personal appreciation for Guyana’s hosting of the Venezuelans here,” Pompeo said, adding that he is “confident we will keep working together and we will do great things alongside each other”.

Ali told the ceremony that during his deliberations with Pompeo he “conveyed his appreciation to the United States and the Secretary reiterated his support and that of the United States for Guyana’s territorial integrity and sovereignty and its call for a timely resolution to the controversy with Venezuela and respect for the 1899 Arbitral Award”.

In July, the International Court of Justice (ICJ) held its first virtual hearing, addressing the territorial dispute between Guyana and Venezuela.

Guyana is arguing that the boundary between the nations was clarified by the Arbitral Award of 1899, whereas Venezuela called the award an “Anglo-Russian conspiracy.”

In taking the case to the ICJ, Georgetown is seeking to enforce the demarcation of the border with Venezuela. The area at issue is west of Guyana’s Essequibo River. The discovery of oil off the coast has sparked a debate between Guyana and Venezuela over the line in recent years.

The ICJ is also considering whether it has jurisdiction to decide the case on the merits.

Maduro has written to the Hague-based court indicating that it does not accept the jurisdiction of the court and would not be participating in its hearings.

UN Secretary-General António Guterres referred the case to the ICJ in 2018.