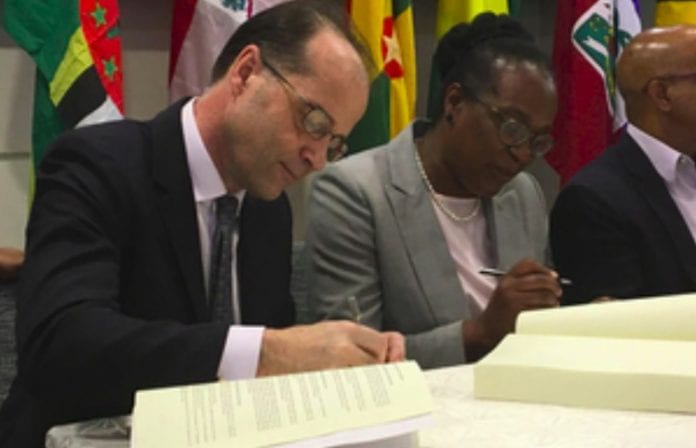 On Friday, March 22, the UK signed a trade continuity agreement with a series of countries in the Caribbean, including Barbados, Belize, The Commonwealth of Dominica, Grenada, The Republic of Guyana, Jamaica, Saint Christopher and Nevis, Saint Lucia, Saint Vincent and the Grenadines.

UK businesses and consumers will benefit from a trade continuity agreement maintaining current arrangements with countries in the Caribbean soon after Britain leaves the EU.

Trade Policy Minister George Hollingbery signed the CARIFORUM-UK Economic Partnership Agreement (EPA) with Ministers and representatives from the Caribbean. The news was welcomed by Caribbean businesses including the West Indies Rum & Spirits Producers Association (WIRSPA), one of the oldest private sector trade associations in the Caribbean. WIRSPA represents some brands well known to UK consumers including Appleton, Angostura and Mount Gay Rum.

The agreement will allow these businesses and many others across the Caribbean to trade like they do now, without any additional barriers or tariffs.

It eliminates tariffs on all goods imported from the signing CARIFORUM States into the UK, while those Caribbean states will continue gradually to cut import tariffs on most of the region’s imports from the UK.

The UK is an important export market for the Caribbean, and the UK bought 100% of Saint Lucia’s banana exports, as well as 69% of Belize’s banana exports in 2017. In addition, 81% of Guyanan, and 64% Jamaican sugar cane exports went to the UK.

These preferential terms are part of the UK government’s commitment to supporting developing countries to reduce poverty through trade. It will help them to grow their economies, create jobs, increase incomes and reduce reliance on overseas aid in the long-term.