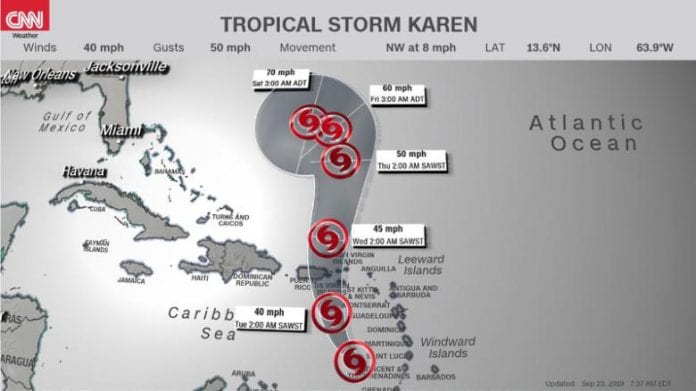 BRIDGETOWN, Barbados, CMC – Tropical Storm Karen is moving across the Eastern Caribbean Sea on Monday after drenching several Caribbean islands with heavy rainfall, strong winds and forcing the closure of schools in Trinidad and Tobago.

There were no reports of any causality following the passage of the storm.

The Miami-based National Hurricane Centre (NHC) said that the storm, which was now located 225 miles west north west of St. Vincent, had sustained maximum winds of 40 miles per hour (mph) and was moving towards the northwest near eight mph.

It said on that this general motion is forecast to continue today and a turn towards the north is expected on Tuesday.

“On the forecast track, the center of Karen will move across the eastern Caribbean Sea through tonight. On Tuesday, Karen is expected to pass near or over Puerto Rico and the Virgin Islands,” the NHC said, noting that some fluctuations in strength will be possible during the next 48 hours due to strong upper-level winds.

The storm is also expected to have rainfall accumulation of up to five inches in the Leeward Islands and the NHC has warned that “these rains may cause flash flooding and mudslides, especially in mountainous areas”.

In Grenada, the Maurice Bishop International Airport (MBIA), which had been closed since Sunday, has re-opened and in Trinidad and Tobago, where heavy rains brought floods, landslides and fell trees in many areas on both islands, schools have been closed as the authorities fear rivers could overflowing their banks.

There were also reports of power outages in Trinidad and Tobago.