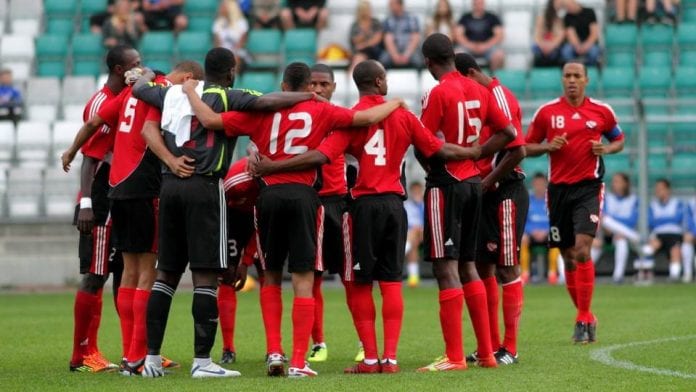 Trinidad & Tobago men’s team fell 2-1 in extra-time against Suriname in their first match of the Scotiabank CFU Gold Cup play-off wednesday night at the Ato Boldon Stadium. It marked the first time since 1979 that Suriname beat the Twin Island Republic.

After the 90-minute regulation-time the teams were tied 1-1 after a no goal first half which saw both teams missing multiple scoring opportunities.

Uno Kwasie of Suriname scored with a left footed shot from at the edge of the penalty-area on the left-side. His shot took a deflection of defender Carlyle Mitchell and flew under goalkeeper Fincette in the 76th minute.

Suriname’s goal spurred on the T&T players and Tyrone Charles curled in a powerful right-footed free-kick from outside the 18-yards box into the roof of the goal for the equaliser, after a foul on team-mate and substitute Shahdon Winchester in the 82nd minute.

Suriname will play Haiti Friday evening at the same venue starting at 7 p.m., while T&T will take on Haiti Sunday starting at 5 p.m.