The Trinidad and Tobago government Saturday hinted at a “cautious reopening of our borders” as it announced a relaxation of several measures put in place to curb the spread of the coronavirus (COCID-19) pandemic that has infected 5, 489 people and killed 105 others in the country.

Prime Minister Dr. Keith Rowley, speaking at the Ministry of Health news conference, said that a committee comprising the Attorney general, Faris Al Rawi, Health Minister Terrence Deyalsingh and National Security Minister, Stuart Young would be established over the next 24 hours and would examine the ways in which persons would be allowed back into the country given that the borders had been closed since March 23.

Young told the news conference that since the borders were closed, Trinidad and Tobago had granted 5,905 exemptions to nationals wanting to return home and 8,046 to persons wishing to leave the island.

“It is reasonable now to bring people home, especially if the protocol is that they come in after a certain aspect of testing and they come in …as permitted and they go home. If they require state quarantine for any reason then that can be managed.

‘I am satisfied that this committee can report within a week and that the tagging system could be available and it will allow us to maximise home quarantine and that will allow us to maximise the inflow of persons who are outside, citizens of Trinidad and Tobago, who are outside to come home and that will then result in an elimination of this exemption system,” Rowley told reporters.

“I see this as a cautious reopening of our border. We are in deep discussions with some of our CARICOM (Caribbean Community) colleagues. I spoke with the President of Guyana (Dr. Irfaan Ali) a few days ago at length and we believe that we could begin to have more movement between our citizens and the Guyanese population, the Grenada population, the Barbados population because the level at which they are at is either lower than or equal to us and we can begin sometime not in the too distant future to make more tentative steps with respect to the border opening.”

Rowley, who is celebrating his 71st birthday, told reporters “it is my hope that by the second of November…we should be able to very definitely put something in place and report to you with respect to this particular matter”.

Rowley said that the authorities now have the capability to do the tagging “that will allow us to go down this route”.

Rowley said that as of Monday, several new regulations would come into effect as the island relaxes some of the measures put in place to stem the curb the spread of the virus, even as he pleaded with the population to continue to wear masks and engage in social distancing.

He said places of worship would be opened for at least one-hour services, but allowing for only 50 per cent of the congregation at any one time, all public servants would be returning to their jobs, and persons who are unable to carry out their studies online for particular subjects that would involve laboratory work.

Persons attending flight schools will also be accommodated once they all adhere to the existing protocols.

In addition, casinos, cinemas and all member clubs will be allowed to operate on a 50 per cent capacity and Rowley said that under no circumstances would these establishments be allowed to sell or provide food and drinks to patrons because of the fact that they would have to remove their masks to consume those items.

“That is mandatory, if it is not being observed, it will have to be shut down,” he said, that bars and restaurants would have to wait two more weeks before it is possible for in-house dining to take place.

He said these establishments are a magnet for persons to congregate and warned: “we are not today in a position to sacrifice the country”.

He said while the coastline would be opened to include beaches, he was advising of people flocking to those areas and that they should at all times be wearing their masks.

“We are living in and trying to make a life in a pandemic,” Rowley said, noting that for some people, it is easy to think of just numbers unless “it comes home to you directly”.

He said he had just lost a friend to the virus and extended his sympathy to all those persons who had lost a loved one as a result of the virus.

Rowley urged the population “not to get tired from responding to the pandemic,” saying that it may be around, according to the experts for the next two or three years.

He said that the pandemic has been a “tremendous cost to our economy and our lives’ noting that given the current situation occurring worldwide, many people here had been critical of the measures which had been adopted by the authorities to curb the spread. 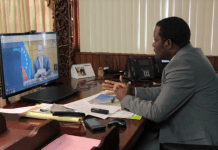