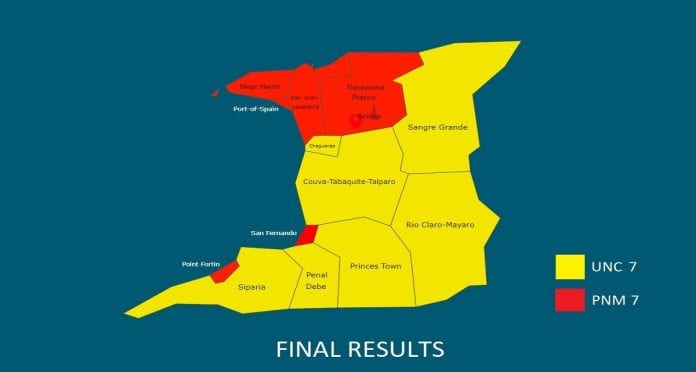 PORT OF SPAIN, Trinidad – The ruling People’s National Movement (PNM) and the main opposition United National Congress (UNC) each won seven of the 14 electoral districts in Trinidad in Monday’s Local Government elections (LGE) with both parties indicating that the electorate had sent differing messages.

While Prime Minister Dr. Keith Rowley acknowledged that “we are not surprised by the outcome but we are quite pleased,” Opposition Leader Kamla Persad Bissessar said “the people have spoken”.

In the last LGE, the PNM had controlled eight of the 14 electoral district, winning seven outright and the eight by the fact that its member had been elected chairman because both parties had gained the same number of seats.

Both parties had contested the 139 electoral districts across Trinidad’s 14 municipal corporation electoral areas, while the fringe political parties, such as the Movement for Social Justice (MSJ) and the recently formed Port of Spain People’s Movement (PPM) headed by former mayor, Louis Lee Sing, failed to make any impression among the voters.

The preliminary results show that the PNM had won 71 of the seats with Rowley saying “there has not been any significant change.

“We are rather disappointed that we haven’t picked up in one or two areas where we had hoped to improve our position,” he said, while admitting that the party had lost ground in some areas, but the situation was “not calamitous.”

Rowley told reporters the party had won “in a very similar vein as 2016 and lost a few seats here” and acknowledged that the policies of his administration in seeking to turn around an ailing economy played a role in the voters’ choices.

“But we have done remarkably well to maintain our position,” he said, adding “when you have a toothache and you have a rotten tooth, you have to go to the dentist. And there is a period of pain. And after that, you realize you have done yourself a service.”

But he dismissed political observers who had earlier indicated that the LGE could have been viewed as a barometer ahead of the general elections that could take place within the next eight months.

He told reporters the LGE and a general election are not the same noting that the turnout at the LGE as below 40 per cent of the more than one million voters.

On whether the local government was a litmus test for the general election next year Rowley replied that they were not the same.

But Persad Bissessar, who has been calling for the government to call general elections, said that the results show that the voters were dissatisfied with the policies of the PNM administration and that no amount of money could influence the outcome of the election.

“Talk done. The people have spoken,” she told jubilant supporters at a celebration in Couva in Central Trinidad on Monday night.

Persad Bissessar said the UNC won 68 seats while the PNM secured 71, but that the ruling party had outspent the opposition party in the campaign.

“Money can’t buy you love,” she said insisting that the UNC had won the popular votes in the election.

She said the voters are “fed up” with PNM policies and is promising that a new UNC government would look at local government electoral boundaries.