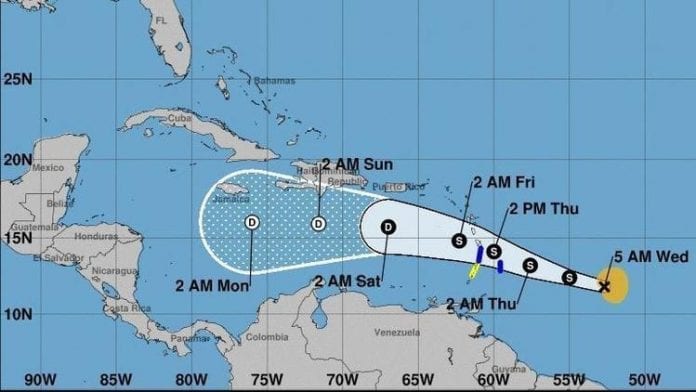 CASTRIES, St. Lucia, CMC – Prime Minister Allen Chastanet Monday announced the shut down of the island as St. Lucia is expected to be severely affected by the passage of a strengthening Tropical Storm Dorian during the early hours on Tuesday.

He told a news conference that the shut down would begin at 6.00 pm (local time) on Monday and “we are asking everyone to stay indoors until the official announcement of the all-clear.”

He said such an announcement would only come from the National Emergency Management Organisation (NEMO).

He said the police have been ordered to stop anyone on streets during the period of the shutdown and “anybody who is out and about before the all-clear is given unfortunately would be viewed as being foul intended.

“So we are asking everyone to be please adhere to the rules that have been put in place and to observe the authorities that are entitled to make those decisions,’ Chastanet said, indicating that the island expects to be hit by the storm, which could be at a category one status by 2.00 am (local time) on Tuesday.

“I look forward to hopefully weathering this hurricane without loss of lives. Certainly, we are expecting the worst because the way the storm is currently developing, the heavier weather is to the northern end of the island and the hurricane is currently 45 miles south”.

Chastanet said that if the .storm passes south of the second city of Vieux Fort, south of here, the island will be affected by “very strong hurricane winds and rains.

“So we should all brace ourselves…and we continue to pray and for the safekeeping of all of the citizens of our country and the guests staying in our country,” he said, noting that the private sector, as well as the various agencies, including government departments, are prepared for the passage of the storm.

“The country will be on a shut down as of 6.00 pm until NEMO gives the official notice that an all-clear has been established,” Chastanet said, reiterating that citizens should only accept information from NEMO and no other avenue.

“In today’s age where there are multitude of app outlets that are confessing to give official information, we want to reiterate the only agency that is authorities to speak on behalf of the government of St. Lucia is NEMO,” said Chastanet, who was flanked by members of his government, NEMO and members of the security forces.

“I want to reiterate to the public of St. Lucia we are now in a hurricane watch and recent times have taught us that we should not attempt to …predict the behaviour of any of these hurricanes because they remain very unpredictable,” he said, recalling in September 2017 that Hurricane Maria had developed from a category one to a Category 5 hurricane when it slammed into Dominica.

“We are anticipating that at this time it could be a Category One hurricane, but given that the hurricane is not actually due here until two o clock in the morning there are a lot of things that can transpire. So it is important that we take this extremely serious,” Chastanet said.

Meanwhile, the Miami-based National Hurricane Centre (NHC) said in its 2.00 pm (local time) bulletin that Dorian is moving towards the west-northwest near 14 miles per hour (mph) and this motion is expected to continue through Tuesday night, followed by a turn toward the northwest on Wednesday. “On the forecast track, the center of Dorian is expected to be near the Windward Islands late today and tonight, and move into the eastern Caribbean Sea on Tuesday. Dorian is expected to pass near or south of Puerto Rico on Wednesday and approach eastern Hispaniola Wednesday night.”

The NHC said that it has maximum sustained winds are near 60 mph with higher gusts and that some strengthening is forecast during the next few days, and Dorian could be near hurricane strength when it passes through the northern Windward Islands on Tuesday.