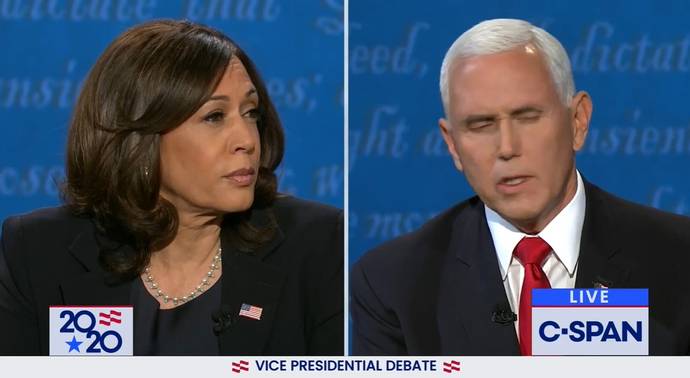 In the first and only Presidential Debate at the University of Utah leading up to the November 3 US Presidential Elections, Harris, the daughter of a Jamaican father and an Indian mother, denounced US Vice President Mike Pence for the administration’s handling of the pandemic.

“Well, the American people have witnessed what is the greatest failure of any presidential administration in the history of our country,” said Harris, former US Vice President Joe Biden’s running name for the Democratic Party’s challenge to President Donald J. Trump and Pence.

“And here are the facts: 210,000 dead people in our country in just the last several months. Over 7 million people who have contracted this disease. One in five businesses closed. We’re looking at frontline workers who have been treated like sacrificial workers. We are looking at over 30 million people, who in the last several months, had to file for unemployment,” the senator from California added.

“Can you imagine if you knew on January 28th, as opposed to March 13th, what they knew, what you might’ve done to prepare?” she asked. “They knew, and they covered it up. The president said it was a hoax. They minimized the seriousness of it.

Pence acknowledged that the country “has gone through a very challenging time this year,” but added that “from the very first day, President Donald Trump has put the health of America first.

“Before there were more than five cases in the United States, all people who had returned from China, President Donald Trump did what no other American president had ever done,” he said. “And that was, he suspended all travel from China, the second-largest economy in the world.

“Now, Senator, Joe Biden opposed that decision,” Pence added. “He said it was xenophobic and hysterical. But I can tell you having led the White House coronavirus task force that that decision alone by President Trump bought us invaluable time to stand up the greatest national mobilization since World War Two.

“And I believe it saved hundreds of thousands of American lives,” he continued. “Because with that time, we were able to reinvent testing. More than 115 million tests had been done to date. We were able to see to the delivery of billions of supplies, so our doctors and nurses had the resources support they needed.

“And we began, really, before the month of February we started to develop a vaccine and to develop medicines and therapeutics that have been saving lives all along the way,” Pence said. “And under President Trump’s leadership, Operation Warp Speed, we believe we’ll have literally tens of millions of doses of a vaccine before the end of this year. The reality is, when you look at the Biden plan, it reads an awful lot like what President Trump, and I, and our task force has been doing every step of the way.”

But Harris retorted that whatever the vice president is claiming the administration has done, “clearly, it hasn’t worked.

In response, Pence said that “the American people have demonstrated over the last eight months, that when given the facts, they’re willing to put the health of their families and their neighbors and people they don’t even know first.

“President Trump and I have great confidence in the American people and their ability to take that information and put it into practice,” he said. “In the height of the epidemic when we were losing a heartbreaking number of 2,500 Americans a day, we surged resources to New Jersey and New York and New Orleans and Detroit.

“We told the American people what needed to be done, and the American people made the sacrifices,” Pence added. “When the outbreak in the Sun Belt happened this summer, again, Americans stepped forward. But the reality is the work of the President of the United States goes on.”

The vice president said he and Trump trust the American people to make choices in the best interest of their health, stating that Biden and Harris “consistently talk about mandates, and not just mandates with the coronavirus, but a government takeover of healthcare, the Green New Deal, all government control.

“We’re about freedom and respecting the freedom of the American people,” Pence said.