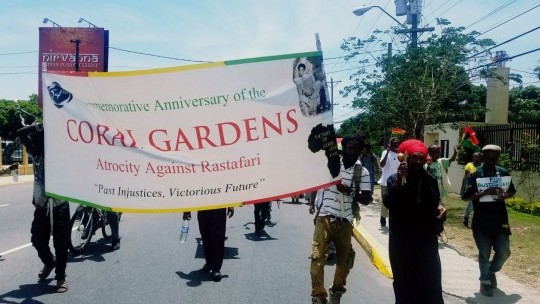 Prime Minister, Andrew Holness, had on Tuesday apologized and announced that a J$10 million fund for reparations to the victims had been set aside. Some 21 families have been identified as being victims of the assault by agents of the state.

Holness also announced that six plots at the site of the first formal Rastafarian commune, Pinnacle in St Catherine would be set aside and marked as heritage sites in honor of the Rastafarian faith, which has been responsible for placing Jamaica on the map, through Reggae Music, vegetarian cuisine and other lifestyles.

But Lorne was not impressed. The attorney at law said Holness did not do enough as the apology should have been issued to the entire Rastafarian community and not just the victims of the fateful April 1963 incident.

“The apology falls short, while we accept the apology, because it is a start it is not enough. You must apologise to the Rastari community worldwide

Seven Rastafarians were killed by police and dozens more inured after bearded men set a gas station alight and killed its owner during a land dispute in the St James community. In the aftermath of the arson attack, the rastas and a policeman were killed and another policeman chopped several times and hospitalized for months as a result of his injuries.

That, Lorne said, has not been addressed as many Rastafarians who had nothing to do with the Coral Gardens incident faced the wrath of the state who called on the populace to help round up, maul and trim rastas.

“Rastas in Portland, Manchester, Kingston and all over the island felt the hands of the police and the citizens, who were paid one guinea for every Rasta they brought in. It spilled over even a decade after the atrocities. I myself suffered from persecution. I was fired from the Half Way Tree Court after two weeks when they found out I had locks. When I graduated from law school the Justices in the High Court held a meeting and voted whether or not they would allow me to practice law. Families would put out their own children who decided to become rastas. Rastas were stoned and beaten. They were not accepted on public transport and had to travel in gullies. So an apology to the victims is barely enough,” Lorne said.

Lorne said the police and the courts in particular were merciless against Rastas as many brethren would be imprisoned for periods of up to seven years for the possession of a marijuana spliff.

He also had problems with the amount of money that the government had decided on as reparations for what he described as a most heinous act.

“That amount is disrespectful. We cannot accept that. For what has been suffered they should offer much more than that and we may seek legal redress,” he said.

Rastafarian author, filmmaker and former senator Barbara Blake Hannah was a more reserved in her view of the government’s apology.

“For me, the apology is long overdue and I am glad it finally came, especially from a JLP government. The $10Million is a good start. I know that more is coming including land. The meetings to be held with the Coral Gardens Benevolent Society will sort out how they want to use it. I personally hope that it will be placed on deposit and the interest used to finance not only the needs of the 21 families presently identified, but to invest in businesses, farms and other means of income. Some will say it’s not enough and that it should amount to the entire budget of Jamaica today, but to be realistic it’s a good beginning,” she said.