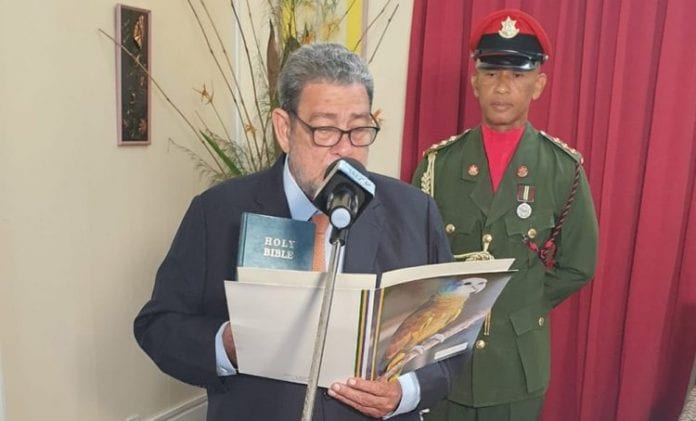 Prime Minister of St. Vincent and the Grenadines, Dr. Ralph Gonsalves was sworn into office for a fifth consecutive term on Saturday, extending a hand of friendship to all in the country, but remaining adamant that his administration will not be involved in the sale of passports to finance socio-economic developments here.

Gonsalves, 74, led his ruling Unity Labour Party (ULP) to a 9-6 victory over the main opposition New Democratic Party (NDP) in last Thursday’s general election, reversing the results of the past two general elections when the party won a slender one-seat majority in the 15-member Parliament.

Gonsalves acknowledged that there have been “bruised sentiments” on both side of the political divide, but said after being sworn in by the island’s first female Governor-General, Susan Dougan, that the time for division was over.

“What is important for us to recognise is that we all belong to St. Vincent and the Grenadines and we are part of this magnificent Caribbean region. We are two small countries to sustain prolonged animosities. We have to love our neighbours,” Gonsalves said, noting that the population must do away with the concept of having gone to Church and then on returning home “we start to fight one another.

“I have always sought to put my hand out to people in friendship and to include the opposition at all times,” he said, noting however that there has to be a recognition “that the reason why we are in government is because we won more seats.

“Therefore it would be a cockeyed notion of democracy for anyone to think that by having a government that they must submit its agenda,” he said.

Gonsalves hinted at the possibility of having a Ministry of National Reconciliation, saying that it had been an issue discussed in the past.

“If you put your hand of friendship out and instead of somebody raise their hand to meet you they have cutlass and chop it off …so you have o do it with good sense and sensibility,” he said.

Gonsalves said that while there may be many commonalities “this general election saw something which we have seen before and have not seen it since 1998.”

But Gonsalves said that with the evolution of technology “we have seen mind benders, hired mind benders from outside of this country who seek to influence …and these persons …were paid for by those who would wish to purchase our sacraments of nationhood and citizenship and our passports”.

Gonsalves has long maintained that under his administration, St. Vincent and the Grenadines would not join some of his Caribbean Community (CARICOM) sister countries in providing citizenship to foreign investors under the much controversial Citizenship by Investment Programme (CBI) in return for making a substantial financial investment in the socio-economic development f the island.

Gonsalves also urged legislators to set aside “at least one day in the week” to go out into their constituencies to meet and hear the concerns of their constituents, saying “when you signed on for this, you sign on for this thing kind of thing also.

“If you know you don’t have the stomach for it get another job. It’s as simple as that,” he said.

Gonsalves said that his achievement in winning five general elections “is equivalent to scaling the political Mount Everest” adding “very few human beings try and most who try don’t get there.

“In fact in practical terms, it is easier to scale the actual Mount Everest than to scale the political Mount Everest. But having said that, that is something for the historians and I am not resenting that in any way which is profound because it is for all intent and purposes something which, though an amazing individual achievement… will only rebound to the benefit of the people if we keep our promises to the people and be true to our mandate,” he added.

Gonsalves has said that the new Cabinet will be named next week and on Saturday, Montgomery Daniel was sworn in as the Deputy Prime Minister, with Jaundy Martin as the Attorney General.