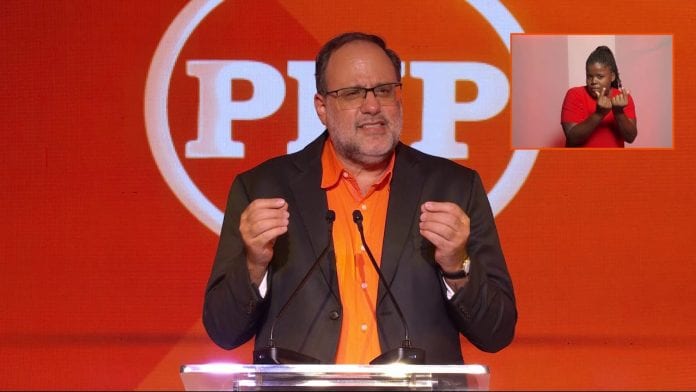 President of Jamaica’s major opposition party, the People’s National Party, (PNP) Mark Golding has publicly come to the defense of his embattled General Secretary, Dr. Dayton Campbell, who he describes as an upstanding and fine individual.

Golding’s defense of Dr. Campbell comes amid a sex scandal, in which it is alleged that the general secretary engaged in sexual activities with minors as recently as 2016.

Mark Golding says he is yet to see anything that would warrant Dr. Campbell stepping down from his position.

“Nothing has been brought so far that warrants any action on his part and it would be a disservice to the struggle of the women in this country if there could be a manipulation of somebody’s life to his detriment on the basis of false accusations that have not been substantiated,” Golding said while on a local radio program on May 31.

“If those accusations are proven to be true or even if sufficiently credible evidence is brought to warrant a charge then that is a different thing, that is not the case here.  So I am asking Jamaicans to think about it because today for me tomorrow for you, the same knife that sticks sheep sticks goat. Justice must be at the center of what we do,” he said.

The National Integrity Action, Opposition Senator Floyd Morris, and women advocacy groups have called on Dr. Campbell to step aside while investigations continue. All four Vice Presidents of the 83-year-old party are alleged to have told the General Secretary he should go.

But the Opposition Leader and party President is standing by Dr. Campbell

The Opposition Leader says he’s instructed the party’s legal advisor to write to the police asking them to investigate the circumstances surrounding three alleged statements that were attached to defense documents filed by PNP activist Karen Cross in a defamation suit brought by Dr. Campbell.

He continued, adding that, “as far as I am concerned there is nothing in place that warrants taking action against an otherwise upstanding and fine individual.”

Mr. Golding says the letter to the police was sent last Thursday following the issuing of a statement by his party on the matter.

The allegations were initially made in March by PNP member and activist Karen Cross, who had threatened to burn the party down.

At the time when Cross made the allegations, no evidence nor statement from the victims was presented. For this reason, the police had closed their investigations into the matter. Campbell had also filed a defamation lawsuit against Cross.

However, Cross filed a counter-suit against Campbell with statements from three girls who alleged that they were sexually involved with the former Member of Parliament, while they were teenagers.

The alleged statements are said to have been witnessed by Justices of the Peace.