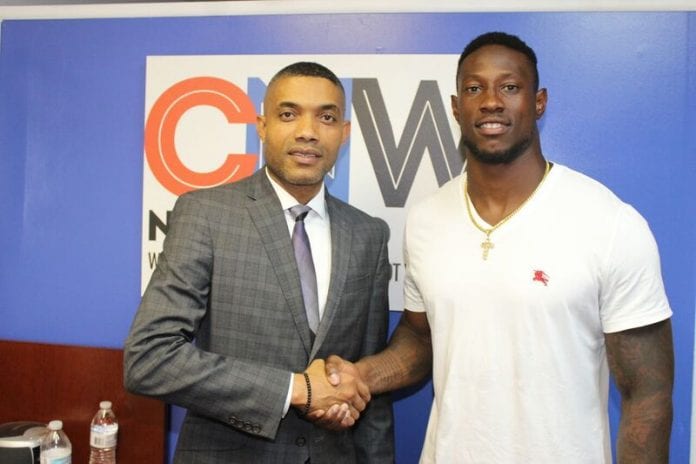 As a student at Piper High School in Sunrise, Nevin Lawson was a star running back with several college teams nipping at his heels to get him on their team.

A misspent youth nearly messed that up.

Lawson, now a cornerback for the Detroit Lions in the NFL, told National Weekly that he lost as many as 10 scholarships due to indiscipline.

“I definitely went through a dark period, but you know I have to thank my parents and my lawyer Mr. (Denzle) Latty for guiding me to where I’m at today,” he said.

He did not go into detail about his period of delinquency but credits football with changing his life.

The second of three sons, 26-year-old Lawson was born in Spanish Town, Jamaica. He migrated to South Florida at age 6, and played soccer and cricket early on. Football took over at Piper High School where he was mentored by coach Matthew Lewis.

Eventually, Lawson played football for Utah State University where he had an impressive three-year run. He was a fourth-round pick by the Detroit Lions in 2014.

His new sense of discipline has earned strong reviews from Lions head coach Jim Caldwell. In a 2015 interview, Caldwell said, “Lawson’s a hungry individual. He’s one of those guys, let me just tell you something, I absolutely love because he’ll fight you at the drop of a hat.”

Lawson’s parents are from rural Jamaica. His father, Clive, was born in sugar-cane Westmoreland; his mother, Jennifer, was born and in the tourist mecca, Montego Bay.

Lawson grew up in Lauderhill, which has one of the largest Jamaican communities. Staying close to roots was important in the Lawson household.

“My Dad, he listened to Gregory Isaacs a lot and Bob Marley, of course. My Mom, she makes the best oxtail in the world!”

The stocky Lawson, his wife Mari Angel and infant daughter are currently visiting South Florida. He travels to the old neighborhood in Lauderhill frequently to catch up with family and friends.

Nevin Lawson is wary about life as a professional athlete. The average career of an NFL player is two-and-a-half years, he noted. But he’s determined to make an impact in the league and his hometown.

“I want to play as long as possible. And I’ll like to reach out to young people here…I’m a family man now, so it’s important to be responsible,” he said.