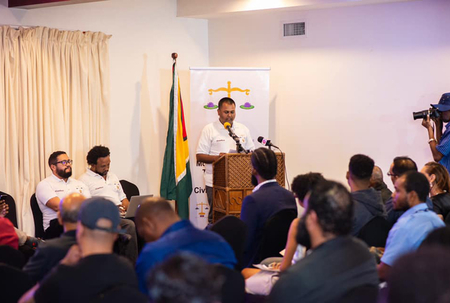 GEORGETOWN, Guyana, CMC – A new political party, promising campaign financing legislation, was launched in Guyana as the country prepares to hold fresh regional and general election on March 2 next year.

The Citizenship Initiative (CI), which has also indicated that it has no intention of joining with either the People’s National Congress (PNC), which is part of the ruling coalition administration and the main opposition People’s Progressive Party Civic (PPP/C), said it intends to change the way issues related to politics are addressed in Guyana.

“Our key platform has to do with leverage in parliament. Now to answer the question of coalition, let me say very explicitly now: Our message is that this adversarial politics by the two giants continues to be the primary burden for the development of Guyana.

“Coalition is not an option…You can’t say that you have goals that you want to attain, you change the status quo and then join the status quo,” said the party’s executive member, Ruel Johnson.

Ally said Guyana has been looking to find its way since it gained independence in 1966 but has instead found itself marred by ethnic divisions, limited opportunities and questionable leadership since independence.

He said Guyana has put power in the arms of two major political parties who have been in control for over fifty years while many of the country’s struggles and problems remain.

He said the new party is focused on chartering a better course for all of Guyana and its members would be representative of the entire society.

Johnson said Citizenship Initiative, whose symbol is a scale balancing two water lilies, will contest the upcoming elections and if successful, would be pushing for constitutional reform as a priority.

He said the party is also focused now on naming Presidential and Prime Ministerial candidates and will address that issue as it rolls out its plans and programmes.

President David Granger named the election date after Opposition Leader Bharrat Jagdeo was successful in tabling a motion of no confidence in his coalition administration last December.

The PPP had been pushing for an early poll, but the head of state said he would have only announced the date when the Guyana Elections Commission (GECOM0 had indicated to him that it was prepared to conduct the elections.