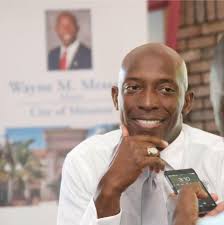 Successful businessman and politician Wayne Messam has served as mayor of Miramar since 2015. On Saturday, March 30, he will be officially announcing his run in the 2020 presidential campaign.

In an exclusive pre-announcement interview with CNW, a confident Messam shared a bit about the driving force behind his decision to run for president, and what he hopes to achieve in the role.

As the leader of the nation, Messam says he wants to rekindle the dying American Dream. “We must recommit to making that an achievable reality – whether someone wants to go to college, start a business, learn a trade, own a home, or start a family.”

Messam further told CNW, “The main problem in our country is a lack of urgency to plan for the future and take action on crises we can see coming, whether it’s the gun violence epidemic, climate change or crippling student loan debt.” He wants to tackle these issues head-on, as well as problems related to shifts in economy, skyrocketing healthcare costs, underfunded public schools, and mending the breakdown in the country’s global leadership role, which, he says, has been worsened by the current administration.

He also believes that as the two-term mayor of Miramar, a fast-growing, diverse city in the nation’s largest battleground state, he is at an advantage among his many Democratic competitors.

“Mayors are closest to the people, and the people think Washington doesn’t work for them. I’ve taken on challenges my entire life to make life better for people, whether by creating jobs or raising wages for workers. I think these big issues need fresh eyes from someone who is closer to the American people on a daily basis. With the support of everyday people, we can finally bring bold ideas back into the conversation, solve problems, and plan for the future,” Messam told CNW. “Mayors get things done for our communities with a sense of urgency,” he added.

He also suggests that being black will not hold back his nomination, noting, “This Democratic primary is the most diverse in history. America is diverse, and its leaders should reflect and celebrate the people they serve.” He is eager to see the country move beyond the current administration’s divided rhetoric, focusing instead on what unites all Americans.

A large portion of his campaign’s funding will come from small donors across all 50 states, he shares. He believes his message will resonate deeply with the masses across the US. “It will be a guiding principle for our campaign to reach people where they are and take no one’s support for granted. Far too many communities in this country feel left behind and deserve someone in their corner who will have their back,” he shared.

“Americans struggling to make ends meet should be the priority,” Messam told CNW. “I’ve spent my life working to better people’s lives. Together, we can create real transformative change in this country, and do just that.”

Messam says he will still diligently run Miramar as its mayor while campaigning, and plans to put the city further on the map by spreading the word about its lengthy list of achievements far and wide while touring the country. Miramar will also be the home of his campaign headquarters.

Messam’s wife Angela and three children are excited about the possibilities for the future. “We had many family discussions about this decision and know this will be a marathon not a sprint, but believe in our hearts that this is the right decision based on our experience, vision and this moment facing our country,” he explained.

44-year-old Messam was born in Florida to Jamaican immigrant parents who both had no more than a fifth grade education. After landing in the US, the politician’s parents worked feverishly to provide for their family –  with Messam’s father working the sugar cane fields of the Florida Glades, and his mother assuming the role of a cook to feed the migrant workers.

Despite his humble upbringing, Messam excelled in academics, completed college and went on to  build one of the fastest-growing, minority-owned construction businesses in the country, Messam Construction, which he owns with wife.