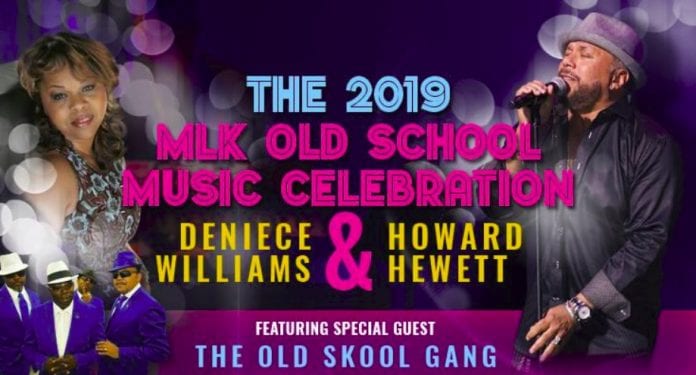 On February 16, the 2019 MLK Old School Music Celebration will be hosted at the Lauderhill Performing Arts Center.

Caribbean National Weekly has joined forces with the City of Lauderhill and the Dr. Martin Luther King, Jr. Task Force for the event, which will feature luminary performers, Deniece Williams and Howard Hewett.

Deniece Williams, otherwise known as “Niecy” is a four-time Grammy award winner who achieved major success in the ‘70s and ‘80s. Known for her distinctive four-octave range and soprano voice, Williams released 24 singles in the R&B Top 40 in the 1980s, including her duet with Johnny Mathis called “Too Much, Too Little, Too Late”.

Williams is a prolific writer who is responsible for penning most of her work. Her musical musical career began in gospel, and she later returned to the genre in the 1990s. Today she continues to perform her secular hits alongside gospel. Williams is best known for her massive hits “Let’s Hear It for the Boys”, “That’s What Friends Are For”, and “Too Much, Too Little, Too Late”, all of which she will be performing at the MLK Old School Celebration event.

Howard Hewett, who signed to Elektra in 1985, began his solo career with R&B hit single “I’m for Real”.  The follow-up single, “Stay” also made the Top Ten, while “I Commit to Love” in 1987 reached number 12. Hewitt earned another hit with “Strange Relationship” in 1988, and cut duet tracks with Dionne Warwick and Anita Baker during the 80s and 90s. His 1990 album included the number two R&B hit “Show Me”.

Like Williams, Hewett stepped into gospel later in his career, with his 2001 gospel album The Journey, and single “Enough”. At MLK Old School Music Celebration, Hewett will perform a bevy of hits, including “The Second Time Around”, “A Night to Remember”, and much more.

A Night to Remember

The old school celebration promises to be a night to remember. Vice Mayor of Lauderhill, M. Margaret Bates, will be hosting the affair. VIP and regular tickets can be purchased online on the website of the Lauderhill Performing Art Center, where a special 15% discount is offered with the use of promo code “NATURAL”.