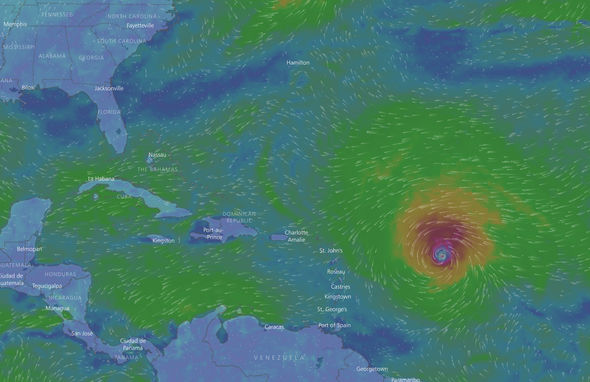 Hurricane Irma, with winds of 130 miles per hour (mph) was churning its way towards the Leeward Islands on Monday. Whether officials predicted on Monday evening that the Category 3 storm would move near or over portions of the northern chain of islands on Tuesday night and early Wednesday.

At 7:00 pm on Monday the National Hurricane Center (NHC) said that the storm was 560 miles east of the Leeward Islands and moving toward the west-southwest near 13 mph.

Maximum sustained winds were near 130 mph with higher gusts.

Additional strengthening is forecast through Tuesday night and it is forecast the hurricane could impact the islands with winds of up to 150 mph.

The NHC has also warned that the combination of a dangerous storm surge and large breaking waves will raise water levels by as much as six to nine feet above normal tide levels along the coasts of the extreme northern islands.

The NHC said that near the coast, the surge will be accompanied by large and destructive waves.

The NHC also said that hurricane conditions are expected within the hurricane warning area by Tuesday night, with tropical storm conditions expected by late Tuesday.

“These rainfall amounts may cause life-threatening flash floods and mudslides. Swells generated by Irma will affect the northern Leeward Islands during the next several days.”

Flights to be canceled

The regional airline, LIAT, said it was canceling several flights as a result of the storm.