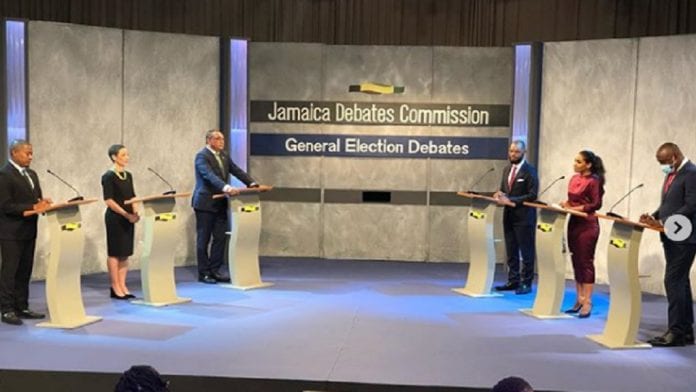 Members of the Jamaica Labour Party (JLP) and the main opposition, People’s National Party (PNP) traded jabs and blames during the first of three political debates on August 25, ahead of the September 3 general elections.

The JLP was represented by Floyd Green, Christopher Tufton and Kamina Johnson-Smith while the PNP’s team consisted of Lisa Hanna, Raymond Pryce and Dayton Campbell.

Jamaicans at home and abroad tuned in for the island’s first-team debate since 2011. But it was a war of words as both political parties traded of jabs at the other, which at often times, overshadowed the social issues that were to be the focus of the debate.

The debate began with a two-minute opening statement from the PNP’s Lisa Hanna, the shadow minister of Foreign Affairs. With eloquence and poise, she states that the PNP has been the party that “has given the majority of Jamaicans access to educational opportunities, good healthcare and social services” because it is the party that believes in “social investment and not social control.”

She also stated that the JLP Administration had mismanaged the COVID-19 pandemic, and cited other issues relating to lack of water and lack of technology for students in rural areas, as failures of the JLP. She took a swipe at the JLP for being “a great PR machine”, and that the PNP is the better party to take Jamaica out of this period of adversity.

For the JLP’s opening statement, Health Minister Dr. Christopher Tufton highlighted some of the achievements of his party over the last four years.

“We have created over 100,000 jobs during that period, unemployment being the lowest it has ever been in history, (and) we have done more for the poor. Poverty has declined by some 40 percent. We have delivered for education where students subsidy for the primary and secondary has increased…”, he said. Tufton said his party had delivered on many of their promises from the last election campaign, and will do the same in their next term.

During the 90-minute debate, several questions were raised regarding how both parties plan to handle social issues, including the COVID-19 pandemic and other health issues, education, roads, and mental illness.

Several times during the debate, the members strayed from the issues and used their opportunity to criticize the opposing party. Members of the PNP heckled the JLP for its perceived overuse of marketing and public relations. Pryce, the PNP candidate for St Catherine East Central and a former TV presenter, even subtly delivered a low-blow to Dr. Tufton, making mention of a recent personal scandal which also involved a local marketing agency.

The members of the JLP did not stay quiet. Green fired back, referring to the PNP as the “Pipeline National Party.” Foreign Affairs minister, Johnson-Smith also took a swipe at the PNP, stating that “if the PNP could build a good country like how they build a good story, they would make a government.”

Overall, viewers largely agreed that Green, the state minister in the ministry of industry, commerce, agriculture and fisheries, was the JLP’s outstanding debater.

On the other side, Hanna was hailed for her delivery, style, confidence, while Pryce was praised for his articulation of the points, facts presented and rebuttals. The JLP’s Johnson-Smith and Tufton were regarded as average presenters.

For many viewers, the overwhelming disappointment of the night came from Dayton Campbell, current Shadow Minister for Health.

His use of the death of Jodian Feraron, who died under controversial circumstances in April, was heavily criticized. Tufton, during the debate, accused Campbell of seeking to politicise the young woman’s death. Campbell was also criticized for implying that members of the opposing team suffered from mental illness, which seemed to downplay the seriousness of the issue.

In the closing statements, Pryce of PNP urged Jamaicans not to elect a party that depends on marketing and public relations for a good reputation. On the other hand, Johnson-Smith assured that the JLP will continue to get them through the COVID-19 pandemic.

The second debate, on financial issues, will be held on Thursday, August 27 between the PNP’s Mark Golding and Finance Minister Nigel Clarke. The culminating Leaders’ Debate between Prime Minister Andrew Holness and Opposition Leader, Dr Peter Phillips, is to be staged on Saturday, August 27.