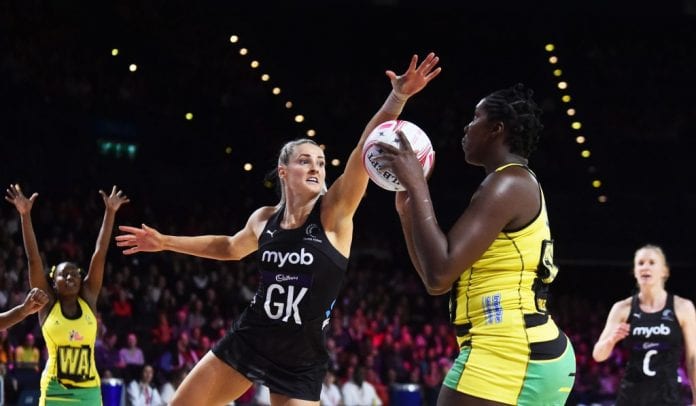 The Jamaican netballers pressured the New Zealanders in the first stages and gradually took control and got the better of the Sunshine Girls in the second half.

Despite the loss, Francis praised her team after the match, saying the Girls raised the bar with their performance against the world champions.

“There are plenty of positives from this game. It was important for our girls to leave everything on the court,” she was reported saying. “There were some questionable calls—I would have loved to see some more consistency—but that’s behind us now. We did make some unforced errors which were really costly but I’m really proud of the effort of all our girls. I thought they really raised the bar in our netball.”

After a difficult Netball World Cup, and the period after, Francis believes they’re in a good place to move forward positively.

This was the second time the Sunshine Girls played New Zealand in the four-team tournament. In their preliminary round match, Jamaica lost by a whopping 26 points, but the Jamaicans significantly improved the standard of play in the finals.

The Sunshine Girls initially trailed 7-1 but rallied to tie at 7-7 before trading goals to find themselves narrowly behind at the end of the first quarter, 16-15.

Jamaica kept up their pressure and were rewarded when they went ahead 25-23 during the second quarter. Predictably, the aggressive New Zealand side hit back to leave the contest tied 30-30 at the half-time whistle.

Jamaica tended to falter in the third quarter when they were outscored 13-8 early and trailed 49-41 at the start of the fourth quarter and was never able to overcome the deficit.

England finished third in the tournament and South Africa fourth.