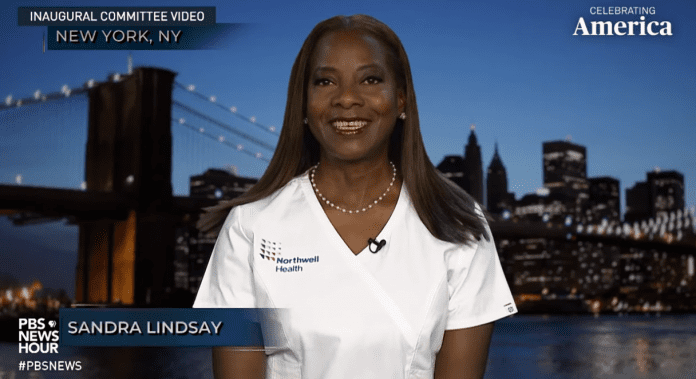 A segment during the televised inaugural gala paid tribute to Jamaica-born Nurse Sandra Lindsay, who led the way in the United States’ COVID-19 vaccination campaign.

The usual inauguration night ball was traded in for “Celebrating America”, a primetime special, hosted by actor Tom Hanks, which featured performances from John Legend, Bon Jovi, Justin Timberlake and Katy, Perry, among others.

During the virtual celebration, President Joe Biden paid tribute to healthcare workers and hailed Sandra Lindsay, an ICU nurse in Queens, New York, who was the first person in the U.S. to receive the vaccine, outside of a clinical trail.

“This crisis has shown the nation that we literally couldn’t survive without you. You’ve been protecting our community for months, and once again, as the virus surges across the nation. I wanna thank you for everything you’re doing to keep communities safe. Its not a hyperbole, you’re actual heroes,” President Biden said.

In the special segment, titled ‘Celebrating Sandra Linsday’, Nurse Lindsay said she was proud to represent for the millions of healthcare workers who have worked tirelessly throughout the pandemic.

“Our nurses care for thousands of COVID patients daily. We’re often the last people to hold their hands. It has taken a toll on so many of us on the frontlines but I’m proud of our work and honored to represent millions of healthcare workers around the country,” she said.

Sandra Lindsay was born and raised in Jamaica. She immigrated to the United States in 1986 to further her education, and eventually embarked on a career in nursing. She lived in Clarendon and attended the Glenmuir High School. Lindsay says she usually visits Jamaica about three or four times per year.

She has encouraged Jamaicans across the diaspora to follow her lead and take the COVID-19 vaccine.