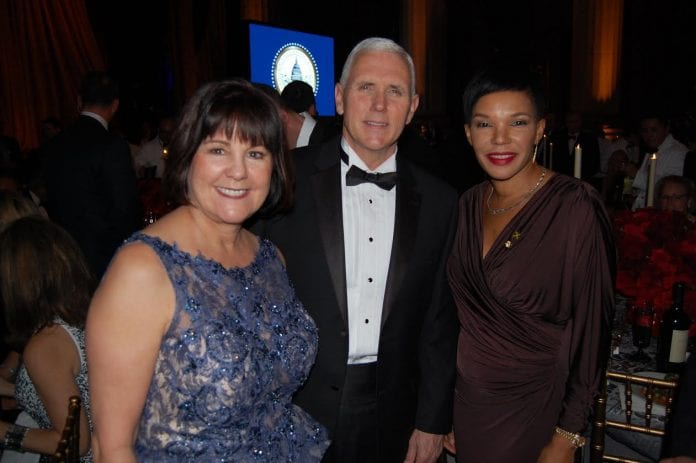 Jamaican Ambassador to the United States, Audrey Marks was a guest at the Chairman’s Global Dinner and Diplomatic Ball held in honor of President Elect Donald Trump earlier this week. At the Ball held at the Andrew W. Mellon Auditorium in Washington DC, Ambassador Marks was greeted by Vice-President Elect, Mike Pence, and his wife Karen.

In brief discussions with the Jamaican ambassador, Vice President-Elect Pence expressed his love for the Jamaica and its people and hoped to visit the island whenever the opportunity arose.

Close to fifteen hundred members of the diplomatic corp and other dignitaries attended the ball, which was the first official event related to the inauguration of Donald Trump as the 45th president of the United States. Trump will assume the presidency at midday on January 20th following taking the oath of office at the US State Capitol in Washington DC

Ambassador is serving her second term as Jamaica’s ambassador to the US. She was first appointed by former Jamaican Prime Minister Bruce Golding in 2009, and when she first arrived in Washington was greeted by outgoing President Barack Obama at the White House.

The Jamaican embassy in Washington says the ambassador is looking forward to meet and represent Jamaica’s interests with incoming President Trump.