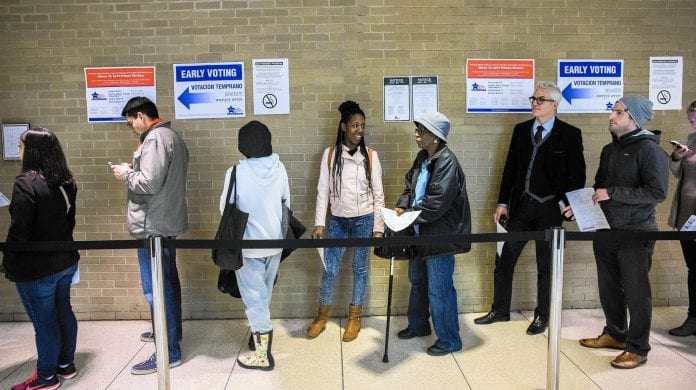 Supervisor of Elections in South Florida has described early voting underway in the August 30 Primary Elections as “steady” and “encouraging.”

Early voting commenced in Palm Beach and Miami-Dade County on August 15, and in both counties representatives of the respective SOE described voting as steady. Lily Hernandez who was at the voting site at the West Kendall Regional Library in Miami on Tuesday afternoon said voting was “somewhat slow” on the first few days, put picked up over the past weekend and this week. “I think the voting in these primary elections are an improvement over past primaries, which is encouraging.” However, Hernandez was unable to give an estimate of the votes cast up to Tuesday.

According to the website of the Palm Beach SOE, over 14, 000 voters had cast votes up to August 24. A staffer said she expects votes to “steadily” increase over the next few days and on Election Day.

In Broward County, Tanya Edwards, Public Information and Voter Education Coordinator at the SOE office said 11,488 voters had voted since early voting began on August 20. Compared to early voting in the similar period of the March 15 presidential elections, this is an improvement.

The three counties have approximately 2,320,000 registered voters. However, since the Primary Elections are closed elections, some 915,000 voters who are registered without party affiliation with either the Democratic of Republican parties, or NPA, are illegible to vote.

At the voting center at the West Kendall Regional Library   some voters, despite earlier publicity, were disappointed they couldn’t vote because they are registered NPA. Carolee and Stephanie Best, expressed frustration when they were turned away because they were NPA registrants. “We are strong supporters of a candidate running for Congress, and anticipated voting very much.”

A representative of the candidate present said the campaign “tried very much” to urge supporters who were NPA’s to register with the relevant party so they could vote in the primaries. “Obviously, and unfortunately, some people ignored our efforts,” she said.

The main objective of these primary elections is for voters to decide on a candidate from multiple candidates seeking to represent that party in respective offices in November’s general elections. Candidates receiving the majority vote in the primary will be elected to office, should there be no declared candidate from another party to oppose him/her in November.

Voters in Lauderhill, in addition to voting for candidates in federal, state and county offices are also required to vote for or against bond issues to raise $44.5 million to fund city projects. These include funding police body cameras, park renovations and road reconstruction.

In the City of Miami Gardens where voters are also voting for mayor and City Council members, voters also have another responsibility. They are required to vote for or against a change in the city charter. If approved by more than 50 percent of voters, city residents will, for the first time, through their elected officials, have a say in the development of lands adjacent to the newly named Hard Rock Stadium, owned by the Miami Dolphins. Approval of the charter means zoning applications would be processed through the city, and if an application is denied or amended developers can appeal to Miami-Dade County.