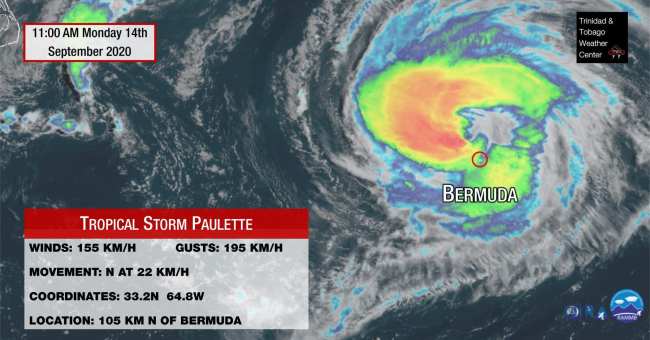 Hurricane Paulette scored a direct hit on Bermuda early on Monday with high winds and lashing rain and knocked out power to thousands of homes, but there were no immediate reports of serious damage or deaths.

Sole power provider the Bermuda Electric Light Company said at noon (local time) that close to 25,000 homes — among its 30,000-plus customers — had lost power across the 21-square-mile island, as Paulette continued to strengthen from a Category 1 into a strong Category 2 storm as it moved slowly north after making landfall early Monday.

In the early afternoon, the island’s Emergency Measures Organisation remained under red status because of hurricane-force winds.

Schools are to remain closed until Wednesday while the island’s international airport is due to reopen at noon on Tuesday.

A Bermuda Weather Service (BWS) spokesman said Paulette was still a Category 2 storm with maximum sustained winds of 98 miles per hour and gusts to about 120 mph as it steadily moved out of the local area.

At 12.30 pm (local time), the centre of Paulette was about 63 miles north of the island after scoring a direct hit.

The spokesman said the “southern flanks” of Paulette continued to affect the island “with bands of quite heavy, squally rain showers”.

Conditions are expected to gradually improve later in the afternoon and into the evening with the expectation that the hurricane warning can be downgraded to a tropical storm warning later.

Storm surge has affected low-lying areas and seas reached up to 40 feet outside of Bermuda.

BWS director Dr Mark Guishard said Paulette was expected to reach Category 4 strength but “not until it’s well out of our area”.

Guishard said it is a “very busy time in the tropics” with five named storms and two other areas being monitored.

But he added that the organisation would “reserve judgment” for now on any potential impact of Tropical Storm Teddy, which the Miami-based National Hurricane Centre said on Monday was over the east-central tropical Atlantic.

In October 2014 Bermuda was hit by two major storms in the space of five days with Hurricane Gonzalo following in the wake of Tropical Storm Fay, which was later upgraded to a hurricane by officials.