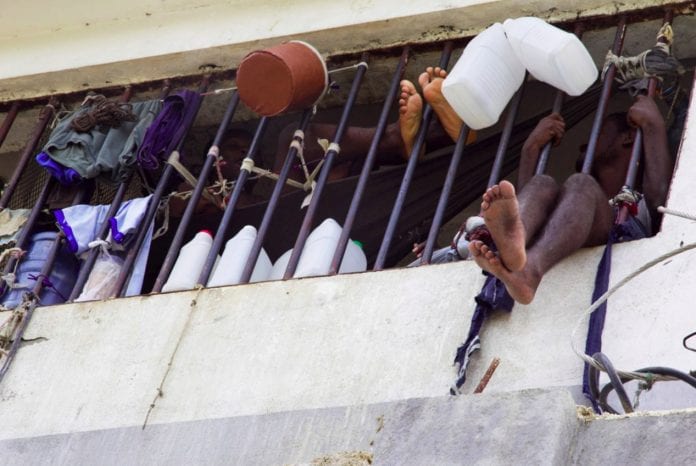 WASHINGTON, CMC – The National Network for the Defense of Human Rights (RNDDH) has lamented the prison conditions in Haiti, telling the Inter-American Commission on Human Rights (IACHR) that as many as 75 per cent of prisoners are currently awaiting trial.

In a report to the IACHR, where the Haitian government was represented, the human rights group said 37 per cent of prison buildings, some of which have existed since the times of the colony, are old and endanger the life of the detainees.

It said that the maximum capacity is 3,000 prisoners, but as of October 23, this year, the prisons held 11,839 people, nearly four times their capacity.

The human rights group said that contrary to Article 19 of the Principles and Good Practices for the Protection of Persons Deprived of Liberty in America, of March 13, 2008, drawn up and published by the IACHR, Haitian detainees are not separated by sex, age, the alleged offense or their legal status.

It said that the beds and mattresses are not enough for the prisoners and thousands sleep on the floor, on pieces of cardboard or cloth brought by members of their family.

The prison toilets are dirty, smelly and poorly maintained, the RNDDH said, adding that the food ratio as envisaged by the only nutritionist of the Haitian prison system is rarely respected.

“This situation exposes the prisoners to a food imbalance, with a predominance of rice offered almost daily and malnutrition,” it said, adding that generally, the Haitian prisons do not have infirmary.

“For a prison population of nearly 12,000 prisoners the prison system has only 23 doctors and 62 nurses” and that 90 per cent of the cases, the drugs are administered to the detainees only on diagnosis of auscultation because the medical examinations are only rarely realized. Drug prescriptions must be performed by the inmate’s parents.

“Without a training program, without recreational activities, prisoners are confined to their cells during their detention and leave only for their physiological needs and ablutions. These conditions are the cause of several deaths on average 12 per month.”

The human rights group told ICHR that in Haiti, arbitrary pre-trial detention is the rule.

“Anyone arrested, regardless of the alleged offense, is systematically incarcerated. The average time of pre-trial detention varies between three and five years,” it said noting that of a prison population of nearly 12,000 an estimated 75.05 per cent are awaiting a judgment and only 24.93 per cent are sentenced. “However, the Haitian law is clear, as of the fourth month, the preventive detention becomes illegal and arbitrary. Some prisoners are still in pre-trial detention while an order has already been issued in their favor for several years. Others, incarcerated for more than 10 years, are still awaiting the results of the judicial investigations opened against them, to be either tried or released.”

The Haitian government which was represented at the hearing is reported to have acknowledged that the prison situation is indeed chaotic and that it was necessary to intervene to improve the general conditions.