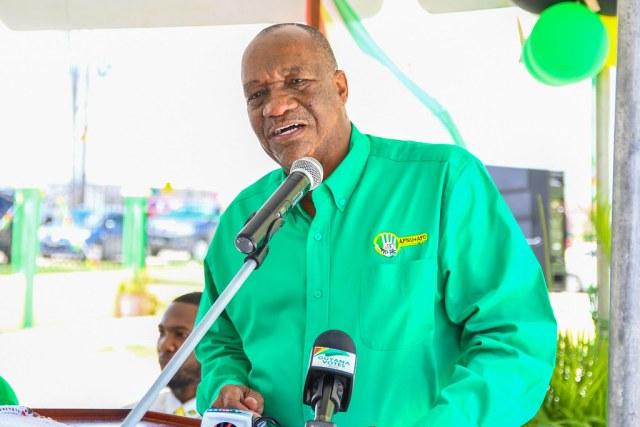 The main opposition coalition, A Partnership for National Unity (APNU) is to file election petitions challenging the outcome of the March 2 regional and general election on Monday.

Joseph Harmon, who is expected to become Opposition Leader when the Parliaments meets following the disputed polls, said in a post on his Facebook page that “the petition will be filed on Monday 31st August, 10 am, at the Supreme Court Building.

“We are asked to mobilize in numbers to lend support to our party. We want a big manifestation against this persecution that is going on,” he wrote.

The Guyana Elections Commission (GECOM) had on August 2, named the then main opposition People’s Progressive Party/Civic (PPP/C) as the victors in the poll receiving 32 seats as compared to 31 for the APNU. An amalgam of small opposition political parties has been awarded one seat in the 65-member National Assembly.

At his inauguration, President Dr. irfaan Ali said a forensic probe would be conducted into the problems surrounding the disputed l elections.

“Very importantly, we will pursue the necessary reforms to make our democracy stronger and our electoral process more transparent,” Ali said at his inauguration as he announced plans for the forensic probe into the recent polls. He warned that those found culpable would be punished.

Ali was declared head of state last Sunday after the Guyana Elections Commission (GECOM) accepted the report reluctantly filed by Chief Elections Officer Kevin Lowenfield, based on the national recount of votes that had been supervised by the Caribbean Community (CARICOM).

The declaration by GECOM ended 22 weeks of legal action by APNU, which had contended that there had been many irregularities. It has since indicated that it will be filing election petitions contesting the declarations by GECOM that the PPP/C were the victors of the election.

APNU leader and former president David Granger said there would be a challenge of the declared results lawfully.

“We urge our members, supporters and friends – who have been patient throughout our campaign and the post-elections process – to continue to conduct themselves in a lawful and peaceful manner,” Granger added.

Meanwhile, Harmon, has formally written to the Secretaries General of the United Nations, Commonwealth, Amnesty International, the Caribbean Community (CARICOM) and the Organisation of American States (OAS) indicating that “based on the vast amount of evidence” the coalition “believes, and intends to prove, that the elections held on March 2 lacked credibility and legitimacy”.

In his August 26th letter, which was also sent to the Presidents of the United Nations Human Rights Council, the Inter Parliamentary Union and Parlamericas and the Chair of the Commonwealth Parliamentary Association, Harmon also provided a summary of the dossier which details the thousands of cases of fraud, voter impersonation, irregularities, abnormalities and discrepancies which were uncovered.

Harmon said the APNU regards “the ‘installed’ PPP/C regime as an illegitimate and fraudulent government that was not lawfully or democratically elected”.

In his letter, Harmon also detailed the “campaign of state terror, intimidation and political persecution which has commenced and is being executed by the illegitimate and fraudulent ‘installed PPP government’ against APNU+AFC leaders, members and supporters”.

He claimed that “the Guyana Police Force, the Office of the Director of Public Prosecution and other state agencies are being either directed or pressured by the political directorate and their agents to target and persecute members of the opposition.

“A discriminatory and vindictive witch-hunt of professionals and public servants is underway” in Guyana and that the APNU coalition views all of the foregoing as “grave, worrisome and very disturbing” developments, Harmon wrote.