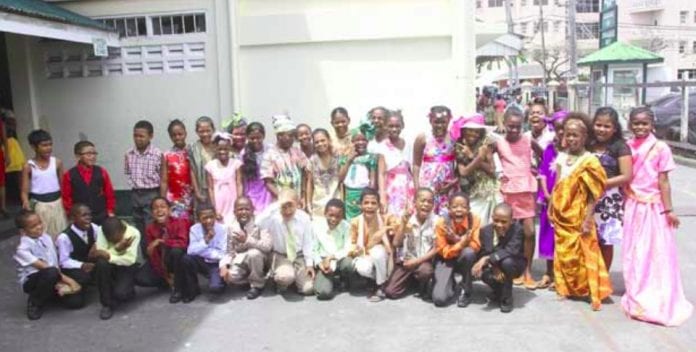 The Amerindian Peoples Association (APA) Tuesday said it supports the peaceful demonstration in front a primary school after a nine-year-old student was prevented from attending class last week in full traditional Amerindian wear during “Culture Day” ahead of Guyana’s observance of its 52nd anniversary of political independence.

The school had described the wear as “inappropriate” but the APA said that it wanted to condemn the “actions by the school for exposing one of its students to this form of cultural discrimination.

“The action by the school to single out and publicly humiliate the student, while other students were allowed to wear their cultural clothing, is disgraceful. As a person of indigenous heritage, the young student had a right to dress in his indigenous wear without discrimination from the public, but especially from an educational institution like Mae’s Schools.”

The APA said that traditional indigenous clothing should not be deemed inappropriate in a country that celebrates its rich cultural diversity.

“It is enshrined in the Constitution of Guyana that every citizen has a right to their religion, cultural beliefs and practices. The Constitution specifically states in Article 149G that indigenous peoples “have the right to the protection, preservation and promulgation of their languages, cultural heritage and way of life”. “

APA said that in addition, Guyana is a signatory to the United Nations Declaration on the Rights of Indigenous Peoples (UNDRIP), noting that this Declaration states that indigenous peoples have the right “to be free from any kind of discrimination… based on their indigenous origin or identity” (Article 2) and that “indigenous peoples have the right to practice and revitalize their cultural traditions and customs” (Article 11).

The APA said it is calling for a public apology from the school’s administration to the student and his family and that preventative measures are taken to prevent this from happening in the future.