“When they go low, we go high” – Michelle Obama 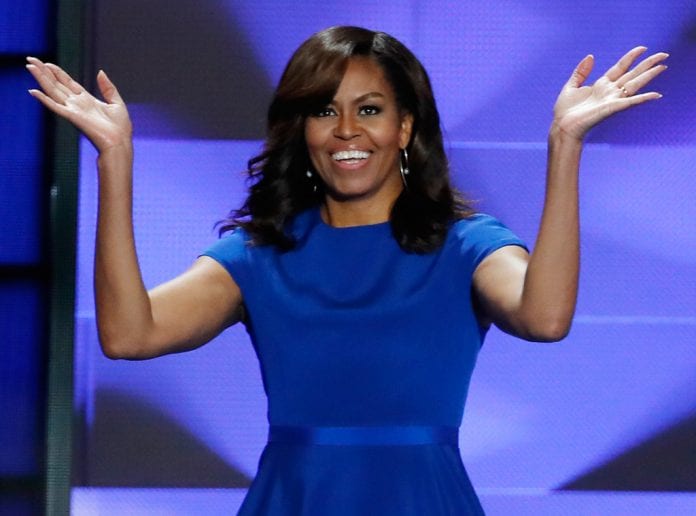 The Twitter universe was extremely vibrant on Monday night with hundreds of Caribbean-Americans and residents in the Caribbean praising First Lady Michelle Obama scintillating address on the first night of the Democratic National  Convention in Philadelphia.

“In a speech of so many memorable lines, what stood out for me was when she said ‘when they go low, we go high.” This stood out for me because it directly referred to the low blows dealt by the Trump campaign against President Obama, Hillary Clinton and the Democratic Party,” Miami-Dade College lecturer Brooklyn Blaise told the National Weekly. “I am a registered voter without party affiliation, but wow! Michelle Obama totally convinced me to vote for the Democratic ticket.”

Down in Perrine, Miami-Dade roommates Michael Hilton and Roger Dale, supporters of Bernie Sanders held a small viewing party to witness Sander’s convention speech. “We were still holding hope, slim as it was that Bernie would convince some Clinton delegates to vote for him. But after hearing Mrs. Obama’s speech, especially when she said after the 2008 campaign when Hillary lost the nomination to Barack Obama, Hillary didn’t get angry or disillusioned because she realized the issue was bigger than her own desires. This made me realize  the overall movement of the Democratic Party is bigger than the Sanders movement, and we need to come together to win in November.”

Miami civil rights veteran activist and Liberty City resident, Latrecia Moses, told National Weekly on Tuesday morning she was so moved by Michelle Obama’s speech, “I couldn’t sleep last night after hearing her.” Moses said, she wonders how many black people, especially “young black people” realize the significance of Michelle’s words when referring to the White House. She said she now “wakes up every day in a house built by slaves” and watch her two girls play on the lawns of the White House. “Lord, oh dear Lord, those were powerful words, as it vividly portrays the journey of the American black race from the slavery plantations to the pinnacle of authority in this country. But still we have a long road to travel because every day there are forces that seek to knock us off the pinnacles we have reached.”

On Twitter during and after Mrs. Obama’s speech tweets flooded social media from across the globe, with several from recognized personalities in Jamaica. One of the more memorable tweets from one such personality read “Michelle commands the divided hall like a modern day messiah.”

This tweet was remarkably relevant as before Mrs. Obama’s  speech, there was a demonstrated division between supporters of Bernie Sanders, most of who were riled over reports of emails leaked by Wikileaks suggesting support by the Democratic Party Committee for Hillary Clinton over Sanders during the Democratic Party primary elections. While Bernie supporters booed and heckled some speakers when they mentioned Clinton’s name, there was no such dissension or disturbance, but rather rapt attention during Mrs. Obama’s speech, for which she received united standing ovation when she was finished.

Another memorable tweet originating from Jamaica read “Barack is good, but he’s now the second best speaker in the Obama family.”