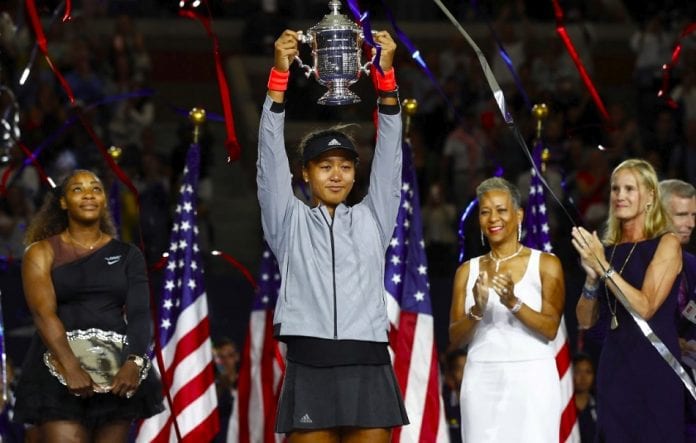 Twenty-year-old Haitian-Japanese up and coming tennis star Naomi Osaka defeated her idol Serena Williams in a very raucous US Open Women Finals at the Arthur Ashe Stadium in New York on Saturday, September 8.  Osaka, became the first Japanese and first player with Caribbean origins to win a Grand Slam singles title. She won the game convincingly 6-2, 6-4.

Osaka, was born in Osaka, Japan, to a Haitian father and Japanese-born mother and currently lives in Fort Lauderdale, Florida.

After winning the US Open she said in an interview that se was “extremely” nervous before the match. In her interview she said, “Serena’s my favorite player. Just playing against her is kind of like a dream for me, so I’m very grateful that I was able to play her and it’s even better that I was able to win.”

Unfortunately, Osaka’s triumph was marred by the controversy involving the chair umpire who accused Williams of being coached during the match. He subsequently denied her a point later in the match when she smashed her racket. In a much publicized with the umpire Williams called him a “thief” and said she “never cheated in her life.”

However, before the contention erupted between Williams and the chair umpire, it was evident that Osaka was in command of the match. She remained unphased as the controversy swirled around her, and went on to win going away. Her win deprived Williams of the chance of winning her 24th Grand slam.

After the match several of the spectators sided with Williams by continuously booing and jeering. This obviously spoiled Osaka’s victory as she was seen in tears, as was Williams. However, by the time of the trophy presentation Williams appeared more composed and was gracious in congratulating Osaka on her victory.

Osaka has been playing impressively this year. Appeasing in the Miami Open in March she won in the first round impressively. Before the US Open she won the Women Singles in the Indian Wells tournament. She has now defeated five, including Williams and Maria Sharapova, current or former World Tennis Association (WTA) number 1 ranked players.

Before the US Open, in 2018 Grand Slams she reached the 3rd round of the French Open and the Wimbledon Tournament and the 4th round of the Australian open.