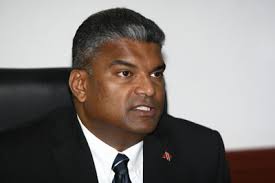 Police have arrested former attorney general Anand Ramlogan for questioning as they continue their probe into allegations that had sought to pervert the course of justice by asking the director of the Police Complaints Authority (PCA) to withdraw a statement he had made in support of the then Opposition Leader Dr. Keith Rowley in a lawsuit more than two years ago.

He was later taken to the police headquarters in the capital for questioning.

A few weeks ago, his attorney, Senior Counsel Pamela Elder had written to the Deputy Commissioner of Police Harold Phillip informing him that Ramlogan was available at any time for questioning.

Last month, Ramlogan told the Trinidad Express newspaper that he has “never been contacted by the police for an interview in connection with this matter.

“The police are aware (from previous written correspondence) who my attorneys are. In accordance with the usual practice and procedure, they would make contact with them in the event they need to speak to me. I can confirm that no one has contacted them as well. This story is, therefore, a fabrication. It is fake news. There is simply no truth to it,” he told the newspaper.

In 2015, then prime minister Kamla Persad Bissessar fired Ramlogan and her national security minister Gary Griffith over the allegations.

The lawsuit followed statements allegedly made by Rowley during a news conference relating to the failed extradition involving businessmen Steve Ferguson and Ishwar Galbaransingh, who are reported to be financiers of the United National Congress, and are wanted to the United States on corruption charges.

Ramlogan has denied that he asked David West to withdraw his witness statement in support of Rowley six days before the PCA director took up his new post.

Persad Bissessar said that Griffith had failed to inform her that he had been allegedly asked by Ramlogan to telephone West asking him to withdraw the statement.

She said those office holders, including the PCA director, preside over the administration of justice “and so they cannot remain in those positions whilst these investigations into allegations are being made”.