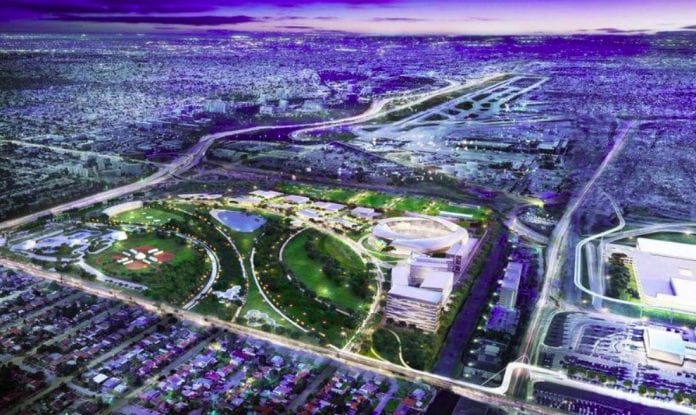 Should we start the countdown clock to the 2020 opening season of the Miami Freedom Park and Major League Soccer in Miami?

Mas tweeted a video and a photo rendering of the state-of-the-art soccer village, which will feature a 25,000-seat stadium, 110 acres of permanent green space and 23 acres of youth soccer fields, which will be open to the public. It will also include restaurant and retail space, office buildings, hotels and a public park.

The video added that the Park will not use any taxpayer dollars and will be completely privately funded to the tune of $1 billion. But the group estimates it will generate up to $40 million worth of annual tax revenue to the city once it’s up and running.

The group also plans to donate $20 million to the city to help activate the park, which is slated to create 11,000 jobs over the next three years; while paying $4 million to $5 million in annual rent for the 73 acres of land.

The ownership previously group reached a deal in 2016 for land in Overtown to build the Park.

Beckham, along with his business partners, Jorge and Jose Mas, and Sprint CEO Marcelo Claure, announced in January that they would bring an MLS to South Florida, with their first season of play expected during the 2020 season.

Decision to be made by City of Miami voters

Beckham and Mas are to present more details of their proposal with the aim of getting the project put to a public referendum November’s mid-erm general elections.

“We’re hoping the people of the City of Miami will vote to make our dreams become a reality,” Mas said.

On Twitter, fans greeted the announcement with optimism. “We are behind you all the way!Fearless, Determined and ready! Vamos Miami!,” tweeted Southern Legion while Miami Mayor Francis Suarez tweeted: “Wow. A beautiful vision! 110 acres of true green public space open and accessible for our neighbors! This will be a vibrant park, entertainment complex, and soccer facility for ALL Miamians. #FutbolMiami.”

“This will be a fútbol club that Miami fans will be proud to call their own,” Soccer is My Game added by tweet.