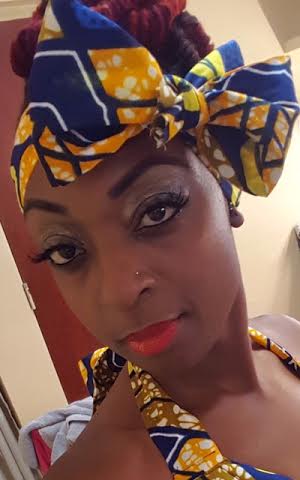 Folayn Griffith, 38, was born in Brooklyn, New York to a Trinidad and Tobagonian mother and currently resides in Pembroke Pines, Broward County.

Having earned two Bachelors of Arts degrees from the University of South Florida, one in criminology, the other in nursing, she settled on a nursing career after caring for grandmother on a 2008 trip to Trinidad.

“When I returned to Florida in 2009 I immediately signed up for LPN (licensed practical nurse) schooling, graduating in 2011. I graduated as an RN in December 2013, and with a bachelor’s degree in nursing in May 2016.” She also plans to pursue a Master’s degree in nursing.

Folayan shares her love for nursing with her love for professional dancing. Trained in African dance by her Mom, Folayan said “I have been dancing since I was in my mother’s womb.” She was taught ballet, tap, and all genres of dance, but prefers the movements of African dance.

“I am also the Vice President of Delou Africa, Inc., a non-profit organization whose mission is to bridge cultural gaps and preserve African culture by facilitating artistic education through traditional African dance, drum, music, and history. My mother is the organization’s founder and president. I have been embracing and partaking in African dance and drum since a very young child.” She has merged African dance with the Miami-Broward One Carnival, winning first place prizes two years in a row.

In her nursing career, her achievements include Nurses Week – Shining Star award, creation of unit nursing council, a resource binder for surgeries and procedures, and a stroke quick reference guide.

She advises members of the Trinibagonian Diaspora interested in a nursing career to “Go for it, you can do it. As long as the drive and passion is present you will make it through. I would never begin to insinuate that the path is easy; far from it. It’s very challenging to say the least but it’s totally worth it as nursing is an extremely rewarding recession proof profession.”

Folayan’s heritage has influenced her life in several ways. She was taught from early on that education means everything. “Get your education, it will take you a long way” was what she heard growing up. “I am proud to be of Trinidadian descent because the rich culture of the country is directly connected to the African Diaspora. I appreciate the diversity of Trinidad and Tobago, with its many multicultural communities.”