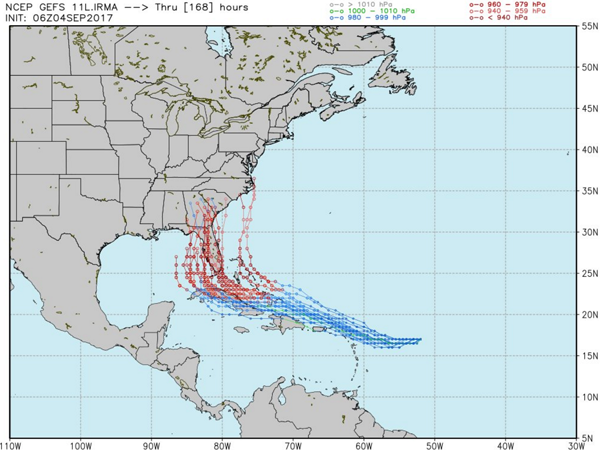 Both a USA and an European hurricane forecast model are converging to indicate Hurricane Irma could impact South Florida as early as Friday this week. The trajectory of the storm prompted Florida Governor Rick Scott to declare a state of emergency for the entire state.

On Monday evening the storm was forecast to pass through northwestern Caribbean, impacting Puerto Rico, Hispaniola and Cuba. The forecasted Hurricane cone expanded some 145 miles and forecast has the storm impacting areas of South Florida by Friday. However, the exact area where the storm could impact is still too early to confirm.

Storm not turning as expected

While forecasters expected the storm to turn more to the north after passing through the Eastern Caribbean, Monday evening’s forecast did not reflect that turns, showing the storm taking a more western path towards Florida.

With the proposed trajectory of the storm pointing towards South Florida on Monday, people took advantage of the holiday to visit supermarkets like Publix and Winn-Dixie to stock up on bottled water, and other supplies.

At Home Depot stores in South-West Miami, which was severely impacted by Hurricane Andrew in 1992, shoppers were purchasing plywood which is usually used to protect windows during a hurricane.

Officials in South Florida are urging all residents to make preparation for the arrival of Irma notwithstanding its exact landfall target is still unknown. Residents are also urged not to wait until the storm is too close to be prepared. It has not been unusual for stores and supermarkets to run out of supplies as a storm approaches.

When shopping for groceries residents are urged to focus on non-perishable items. Since electricity could be lost during the storms and for days following it is important to avoid foods that requires refrigeration.

Residents on medication should ensure they fill their prescriptions before the storm hits. They should have medication to last for up to two weeks.

Motorists should ensure they fill the tanks of their vehicles with petrol prior to the storm. It will be difficult for gas stations to pump petrol if they lose electricity.

Residents should also draw sufficient cash to last for a number of days, as banks could be closed for an indefinite period, and without electricity, ATMs will be useless.