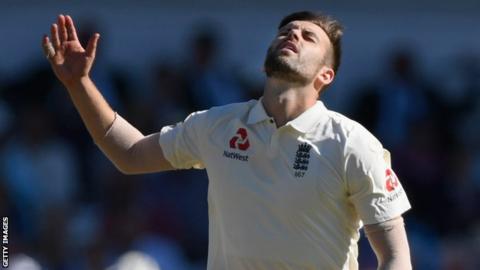 GROS ISLET, St Lucia, CMC – England have taken complete control of the third Test against the West Indies at the end of the second day’s play, thanks mainly to the bowling exploits of speedster Mark Wood and spinner Moeen Ali.

On a day which saw 16 wickets falling, England was able to establish a healthy first innings lead of 123 runs, which they duly stretched to 142 having reached 19-0 in their second innings.

The home side had initially wrestled the momentum away from England in the opening session, with Kemar Roach grabbing four quick wickets to help bowl England out for 277 after they had resumed on 231 for four.

But Wood grabbed his first five wicket haul in Tests and Ali snagged four wickets to rout the Windies for 154 and give England a sizeable lead.

Mark Wood bowled with pace and accuracy to grab his five wickets.

It was a pathetic batting display from the West Indies, with only John Campbell and Shane Dowrich putting up any resistance.

Skipper Kragg Brathwaite along with fellow opener Campbell gave the West Indies a good foundation on which to build during a 57-run opening stand.

However, once they fell within two balls of each other, the Windies’ middle order collapsed.