The debate over the glut of standardized tests in American public schools reemerged this week with a shocking report from the Council of the Great City Schools, showing a school curriculum overrun by excessive exams. In 2014-15 school year alone, students in 66 school districts, including in South Florida, sat over 400 assessment tests. Students spent 20 to 25 hours annually on standardized testing, and were required to take an average of 112.3 tests between pre-K and twelfth grade.

Miami-Dade School Superintendent Alberto Carvalho, who participated in the Council’s study, has come out staunchly opposing the examination trend. Citing reports from the National Assessment of Educational Progress (NAEP) showing Miami-Dade  from forth to eighth grade surpassing national performance in reading and math, Carvalho attributed this success to less testing in the school district.

For the past 15 years, the system has been slanted towards standardized testing. Teachers and schools are also evaluated by the scores these students attain. This has put far too much pressure on students and teachers. And the overemphasis on testing reduces the overall quality of education adequately preparing them for college and the job market.

This environment is a result of the George W. Bush administration’s No Child Left Behind (NCLB) program, which mandated annual testing in reading and math, and later science, from third to eighth grade, and grade ten. Those that didn’t meet progress deadlines were subject to serious penalties, including being closed or taken over by state authorities.

The Obama administration also emphasized assessments tests with the Race to the Top program, which offered billions of dollars to schools that excelled based on schools test scores. Further incentives were also offered to states to conduct school assessments related to the state’s own educational standards. Though these standards considered other factors such as attendance, graduation rates, and learning environment, testing remained the key criteria.

Such emphasis on high test scores, and the resulting high stakes for teachers and school’s evaluation, has provoked corruption among teachers and school administrators. There have been many reports of teachers padding scores to ensure positive evaluation. The consequences have often proved tragic. This year alone, several educators from the Atlanta, Georgia school system were sentence to prison for racketeering.

Ironically, since the surge of standardized testing, U.S. students have slipped from 18th globally in math in 2000 to 31st place in 2009, with a similar decline in science.

As criticism against increase testing mounted, in 2011 Obama urged reform, conceding that standardized tests were being used to “punish students or to, in some cases, punish schools.”  Last week, in response to the Council’s report, Obama admitted the federal government placed too much emphasis on testing. He urged the U.S. Department of Education to cap standardized tests at 2 percent of classroom time.

There are alternatives to excessive standardized testing. In the Caribbean education system, the focus is on end-of-term tests in all subjects students pursue, and major end-of-year exams for senior high school students. Students are also assessed through evaluation of homework, and classroom assignments. Scores from homework, class assignments, and tests contribute towards the overall grade. These scores are also considered in students’ evaluation for graduation.

The Caribbean’s educational system also encourages greater classroom participation. The goal isn’t for students to be just competent in passing academic tests, but to receive a comprehensive education that enhances their problem-solving skills, better equipping them to advance to college or enter the work-force.

Often when students transfer from Caribbean to U.S. schools, they have a distinct advantage over their peer, because they have been educated in reasoning and comprehension.

Educational leaders in South Florida are encouraged to support Superintendent Carvalho in working with the federal and state governments to reduce standardized testing in public schools. This will go far to improving our local education system, for students, teachers and schools. 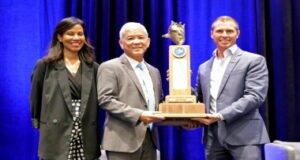