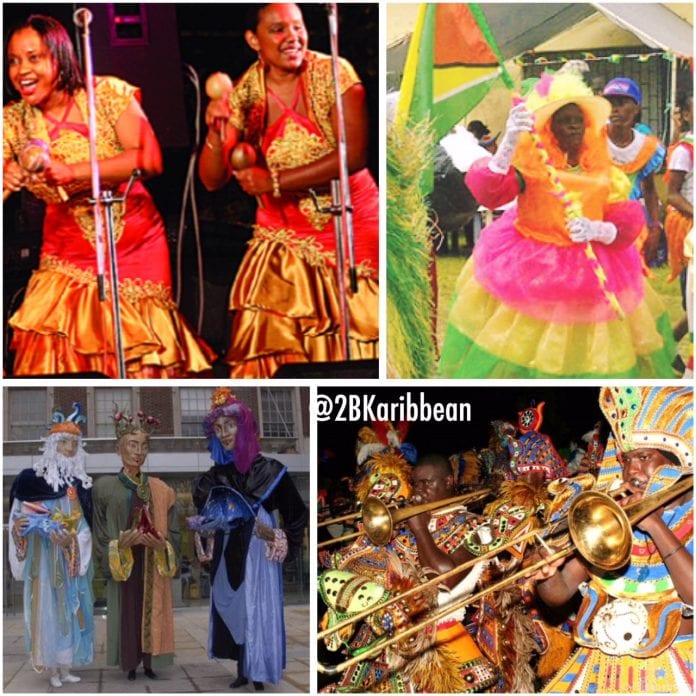 Christmas is a very special time in the Caribbean, highlighted by Christmas Day, but with the festivities beginning from around December 1.  Regionally, the season is characterized by a heavy rotation of Christmas carols and music on the radio; office, school and house parties; shopping including special Christmas markets; cultural dances and masquerades; concerts, feasting, caroling by church groups, exchange of gifts, and of course, Christmas Day church services heralding the birth of Jesus Christ.

In recent years, as the North American and European influence permeates the region aspects of Christmas in the Caribbean has adapted a foreign flavor. This includes the decoration of artificial Christmas trees, Santa Claus at malls and shopping centers, decorations of houses with Christmas  lights and a more profound commercialism than in former years.

Despite the influence from the First World, there is something about Christmas in the Caribbean that is special, more inter-personal, offers a greater expression of love and carries a more poignant religious message than in either North America or Europe.

Some of the features of Christmas in the Caribbean include:

Preparations for Christmas in the region begin weeks before Christmas Day. For most families regardless of how humble the focus in on home and children.

Christmas is also the time for new curtains, bed spreads, utensils, furniture and electrical appliances. Several people save during the year in traditional bank accounts, Christmas clubs or informal ‘partners’ to have ‘Christmas money’ to “fix up the house.”

In the modern Caribbean homes, families decorate real or artificial trees, and several hang colored or white Christmas lights from their roofs.

As Christmas approaches parents spend some of the ‘Christmas money’ to purchase new clothing and toys for children. On Christmas Day children, and their parents too, are usually seen in church or Christmas market in their new outfits from head to toe. Girls are proud of their Christmas dress and boys their new Christmas shoes.

Certain drinks and food are key components of Christmas in the Caribbean. In Jamaica housewives set about “drawing” sorrel, by steaming the fleshy buds from the plant in  water, white rum, blended with ginger, pimento and sugar. The longer the sorrel drink is set to brew the better the drink tastes when it is served on Christmas Day.

In some countries in the region, women purchase and season portions of pork days before Christmas Day. In Antigua, for example pork cooked in a variety of forms is very popular at Christmas. In countries like Jamaica a leg of ham is purchased and baked in the days just before Christmas.

Another traditional Christmas treat is the Christmas pudding, and cake. These pastries are made from a blend of mixed dry fruits including currants, raisin, prunes, mixed peel, and very liberal application of red wine and/or rum.

Caribbean homes have a special aroma in the immediate days before Christmas emanating from hams, puddings and cakes being baked in ovens.

Christmas Day, after the opening and exchange of gifts on Christmas morning, is one long day of feasting and drinking in the Caribbean, but the focal meal is Christmas dinner.

The content of the meal varies in every Caribbean country depending upon the culture of that country. In Jamaica baked ham, fried or jerked chicken, roasted beef, curried and rice and peas is almost a certainty, Many countries have now adapted the roasted turkey.

In Antigua the meal will consist of baked, corned or stewed pork.  Trinidadians will have pastelles – a cornmeal pocket stuffed with minced beef, highly seasoned, with peppers and olives, and varieties of roti. In Barbados the specialty is jug-jug, a dish made with ground meats, guinea corn and pigeon peas.

The drink is either rum punch, sorrel, ginger beer, mongay (Trinidad), rum-popo (Belize), anisette (Haiti), or a fruit punch, and dessert all over the Caribbean is the famed Christmas fruit (black) cake or pudding.

The Christmas meal is a main event for the gathering of families, old and new, and friends who may have no family or visiting from overseas. Usually there is food for anyone who wants to share in this great Caribbean Christmas tradition, which is akin to what the Thanksgiving meal is in the USA, plus some.

In Haiti, Haitians attend midnight mass and return home to enjoy the “reveillon” meal, a breakfast that begins very early on Christmas morning lasting until the sun comes up.

In several islands Christmas is characterized by colorful masquerade groups that parade and dance to musical bands featuring drumming and the blowing of fifes..

Among the most popular of these bands are the John Canoe dancers.  Some 50 years ago John Canoe bands were very popular in Jamaica. These bands including players dressed in costumes depicting the devil, policemen, dragons, horse heads, pregnant women and clowns, paraded the streets dancing and prancing. Although they were usually a festive attraction some of these masqueraders scared some children and even adults. These bands are rarely seen in Jamaica nowadays.

There are similar bands in other islands, including the Highlanders, Jumba-Ben  and Tall Ghosts in Antigua.

In some islands Christmas is a time to break out traditional music. On Christmas Eve, mainly in rural communities, groups of residents still go out caroling with a Caribbean flavor.  In some areas of rural Jamaica one can hear mento bands on Christmas Day at fairs, or see folk groups dancing the Quadrille, and young girls performing the colorful Maypole dance.

In Trinidad and Tobago Christmas is Parang season. Parang is a lively, rhythmic music featuring instruments including drums, guitars, maracas, saxophones, tambourines, that has its origin in Spanish culture. Parang is heard and danced all over Trinidad at Christmas, and is as popular as calypso and soca is at carnival time.

Parang is also popular in Grenada where a parang festival is during the Christmas season.

Dancing, whether to reggae and dancehall in Jamaica, Parang in Trinidad and Tobago, compas in Haiti, is very popular at Christmas. The night clubs which have mushroomed in Caribbean cities in recent years are jammed pack at Christmas, especially on Christmas Eve, Christmas night and Boxing Day.

Christmas in the Caribbean is characterized by cool winds – “The Christmas Breeze” that blows in from North America adds to the Christmas mood. This mood is enhanced by the lush blooms of poinsettia and bougainvillea which creates natural red and white Christmas colors across the landscape.

No matter how times are hard financially, people in the Caribbean maintain a peculiar happy, cheerful mood during the Christmas season. This is the natural, infectious spirit of Christmas in the Caribbean, a spirit that blended with the sound, music, and religious message of Christmas, makes those residing in the Diaspora yearn with nostalgia to return home every December.