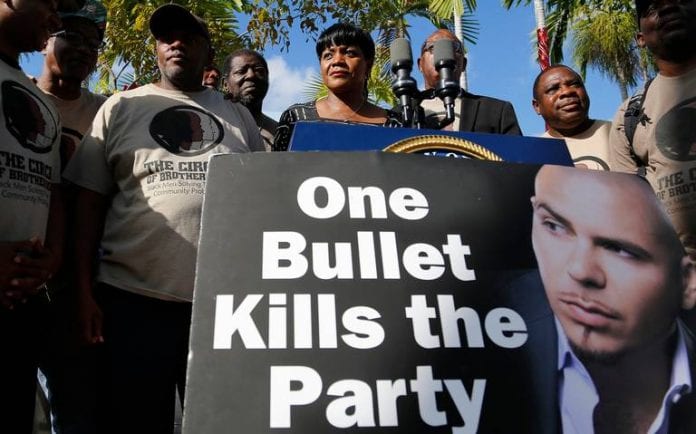 Tomorrow, December 31 is New Year’s Eve, a traditional celebratory date to chase away the old year and usher in the new. Among the usual colorful fireworks displays, and singing of the traditional New Year song “Auld Lang Syne” in South Florida, is the irresponsible action by some residents to fire bullets in the air.

Firing bullets into the air is dangerous and illegal. The bullets will fall to the ground, and risk injuring innocent, unaware people, causing serious injury or even taking lives.

City of Miami Mayor Tomas Regalado and Miami-Dade Commissioner Audrey Edmonson who spoke at a recent press conference in Liberty City cautioned residents about the danger of the illegal practice of firing gunshots in the air on New Year’s Eve or any other time.

Regalado said any one who partakes in this illegal celebratory practice “should know they are going to get caught.”

Commissioner Edmonson urged residents to celebrate New Year’s Eve responsibly, and refrain from the “obvious dangerous practice” of firing bullets in the air “as these bullets will come back down.”

The Miami Mayor said public education has helped to curb this dangerous practice, but it is the responsibility of city and county officials to caution people against this, and continue to urge residents to celebrate responsibly.

In past year’s South Florid residents have fallen victims to falling bullets fired in the air not only on New Year’s Eve, but on July 4, another iconic celebratory holiday in the United States. “New Year Eve and July 4 are traditionally celebrated with fireworks when night falls. I am not sure if it’s an import from the neighboring Latin American culture, but some South Florida residents tend to equate fireworks with shooting shots into the air. But it’s very dangerous and its wrong,” said Miami-Dade police officer Pedro Martinez.