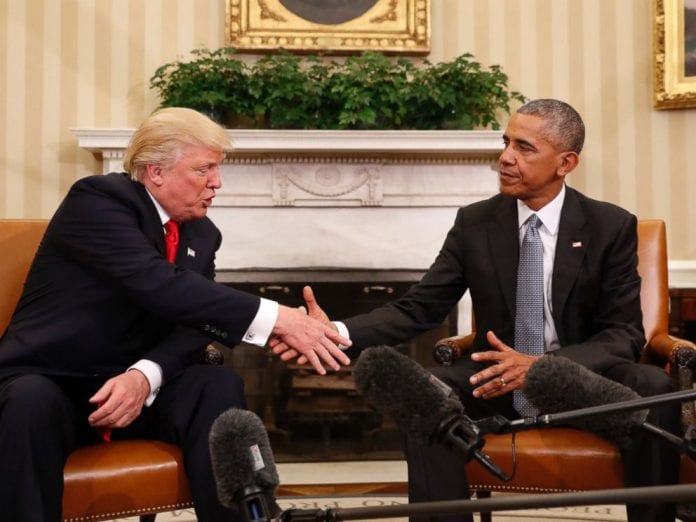 Donald Trump elected 45th President of the US

In what many in South Florida’s Caribbean-American community describe as a “shocking and devastating” upset, Republican Donald Trump convincingly won the US presidency in general elections held on Tuesday, November 8.

In preliminary results, as of Wednesday morning, Trump needing 270 electoral votes to be elected, had won 289, including Florida’s 29. Democrat Hillary Clinton tallied 218, with the race in Michigan, Minnesota and New Hampshire too close to call, but even if she won those states, it would not change the result.

Clinton, who was the overwhelming favorite of South Florida’s Caribbean-American community by over 80 percent, conceded to Trump in a congratulatory telephone call at approximately 2:30 Wednesday morning. But she did not make a concession speech to her supporters. This was done later on Wednesday.

In it, she thanked them and urged the nation to come together after the bitter and divisive election campaign.

President Obama, who campaigned aggressively for Clinton, also called Trump to congratulate him. Trump is expected to visit Obama later this week at the White House to begin discussions for the transition which officially takes place January 20  when Trump is inaugurated as the nation’s 45th president.

On Tuesday evening, several Clinton supporters and campaign volunteers gathered at an election watch party at a West Kendall restaurant. The mood was initially buoyant and optimistic around 8:00 pm but slowly turned glum as the votes for Florida came in and showed Trump was leading by a large margin and eventually won the state.

The mood worsened when the national results showed Trump winning Ohio and North Carolina, states the Democrats needed to win.

Granville Simmons, a Caribbean-American Clinton supporter who had confidently projected her winning Florida, and the presidency with 303 electoral votes, said the loss was “A devastating and shocking defeat. It makes one numb with shock like hearing of the sudden death of a very dear, loved one.” Simmons’ response was similar to Caribbean-Americans across South Florida.

Commenting on the election results, a Clinton campaign coordinator in South Florida, Gabbie Marsh said, “What makes the loss the more devastating is that the campaign succeeded in turning out the Caribbean and African-American votes. Some 80 percent of Caribbean-Americans voted and 75 percent of African-Americans. South Florida voted for Hillary some 64 percent to 36 percent for Trump, but it still was not enough to win the state. It’s devastating.”

Although the results showed the coalition of Hispanics, Caribbean-Americans, African-Americans, women, and millennial voters voting in favor of Clinton, exit polls indicated 34 percent of Hispanics still voted for Trump.

The black vote was down some five percent compared to the 2012 presidential elections and the vote by millennials declined 10 percent.

Marsh speculated. “Perhaps Hillary would have won if more Hispanics had voted for her, and more young people turned out to vote. However, even then those votes may not have been enough to overcome the surge of votes Trump received in the western and northern counties of the state from the coalition of white voters.”