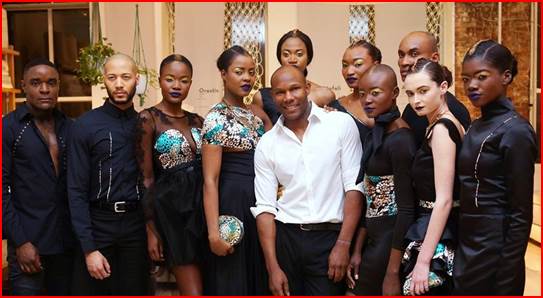 The Fall 2016 runway show, which coincided with the celebration of Black History Month saw the Jamaican-born designer drawing inspiration on the immigrant experience.

March’s season’s collection was inspired by the story of a black stylish couple from the fashion capital of Paris who emigrated to New York City and the challenges of race and color they face in adjusting given their strong sense of style and fashion.

As has become customary for the designer, each show has an unusual or unexpected opening. And this year was no different as this season opened with a talented dance trio comprised of two males and one female from the Alvin Ailey Dance School in New York.

Before a large-sized crowd, the Fall 2016 collection opened with the campaign dress which set the mood for the show which saw the designer using black as the basis of his collection complimented by a remarkable fabric which he took back from a recent Paris trip, a mix of white, aqua and gold that contrasted well with the collection.

The Fall 2016 collection, designed for both women and men, comprised a number of cocktail dresses, a signature evening gown and men’s casual elegant wear.