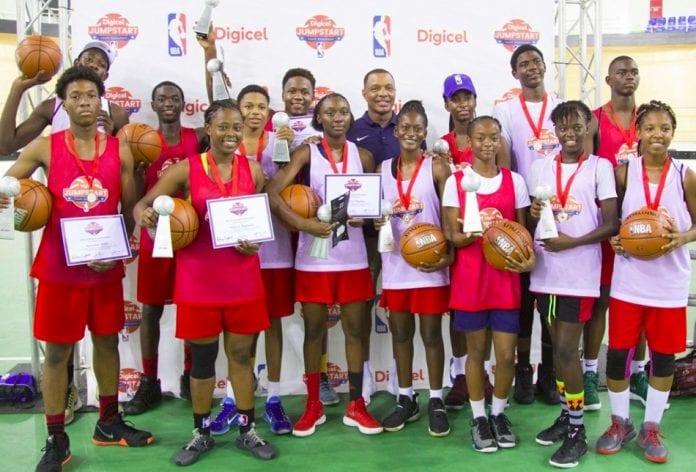 Fourteen lucky and skilled boys and girls from the Digicel NBA Jumpstart Program will get the thrill of their young lives this weekend as they attend an NBA game at the Barclays Center in Brooklyn, NY.

It is all part of a collaboration with Digicel and the National Basketball Association (NBA). The top 14 from the Digicel NBA Jumpstart Program will attend the games featuring the Brooklyn Nets and the Golden State Warriors on Sunday, October 28th.

The players were selected by New Orleans Pelicans Head Coach, Alvin Gentry, following their participation in the Digicel NBA Jumpstart Elite Camp held in Trinidad and Tobago recently. That camp brought together the best basketball players, aged 17 and under, from Antigua and Barbuda, Barbados, Haiti, Jamaica, Trinidad and Tobago and the Turks and Caicos Islands.

Plenty talent in the Caribbean

“We have a lot of young talent in the Caribbean who don’t often get the chance to showcase their abilities or receive the level of encouragement and support they need to take their game to the next level,” said Digicel Group Sponsorship Manager, Tari Lovell.  “Through this NBA partnership, we can provide these players and their coaches with the proper training and inspiration to grow the game across the region.”

NBA Vice President, Latin America, Arnon de Mello, said the ongoing program is proof of the commitment to developing the sport in the region.

“We are proud that the fourth year of the Digicel NBA Jumpstart program has been successful in showcasing our commitment to growing the game in the Caribbean and all of Latin America,” he said.

The 2018 Digicel NBA Jumpstart Camps, which visited Haiti for the first time, in addition to the Turks and Caicos, Antigua and Barbuda, Barbados, Jamaica and Trinidad and Tobago, featured an expanded format with a record 72 youth participating at each camp.